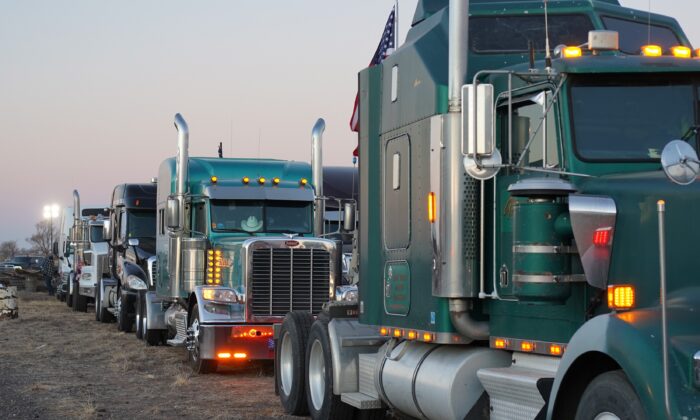 US Trucker Convoy Swells as It Moves Across Country to DC

ON THE HIGHWAY, Okla.—The largest truck convoy in the United States has grown in size since departing California and is attracting thousands of supporters as it makes its way toward the East Coast.

The “People’s Convoy” started with around 150 vehicles and has grown to more than 250 as it made its way through Texas and Oklahoma over the weekend.

More vehicles have joined for stretches of time. That, along with the length of the convoy, makes it difficult to pinpoint exactly how many participants it has.

“It varies. Let’s just say there are like 50 truckers that know the convoy is coming through and might have been going through this area. They’ll stop at an exit and they’ll wait for the convoy to come by, and then they’ll join it. They might join it for 200 miles or 100 miles, and then they keep going wherever they were going because they were heading in the same direction as us,” Maureen Steele, one of the convoy’s organizers, told The Epoch Times. “And then there are cars that join … and some of them go for 30 miles, some go for 100, some for 200, and then they drop off.”

Collin Walters joined the convoy for about 25 miles.

“This is a movement that everybody should be supporting. This is a national event; this is making history,” Walters told The Epoch Times. “It’s pretty exciting.”

Kathy Walters, his aunt, said she opposes COVID-19 vaccine mandates such as the ones the federal government imposed. She sees them as violating Americans’ free will.

Convoy organizers say they’re against vaccine mandates, the federal government’s continuation of a national emergency declaration over COVID-19, and other actions by the Biden administration.

Organizers have been sending drones up periodically to capture estimates of vehicles traveling with the group, which has drawn thousands of people to roadsides as the convoy passes by.

Chuck Frantz showed up to display his support for the convoy in Weatherford, Oklahoma.

“This is getting people’s attention,” Frantz told The Epoch Times on a highway overpass. He described the mandates, some of which have been struck down by courts, as unconstitutional.

A spokesman for the Amarillo, Texas, Police Department, which worked to make sure the convoy’s passage was smooth, told The Epoch Times that there were no issues.

KTUL-TV reported that several vehicles in the convoy were involved in a crash about 15 miles west of Big Cabin, Oklahoma. The Oklahoma Highway Patrol, which didn’t respond to requests for comment, told the broadcaster that the cause of the crash is under investigation.

The convoy stopped in Big Bend, Oklahoma, on the night of Feb. 27 and was prepared to travel to Missouri on Feb. 28. It’s on track to arrive in Washington, where authorities are reinstalling fencing around the Capitol, on March 5.