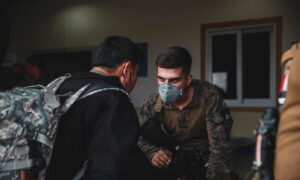 'I'm Trying to Get My Family out of Here': American Describes Being Stranded in Afghanistan
0
Share Now
TelegramFacebookTweetEmailTellMeWeReddit
Copy Link 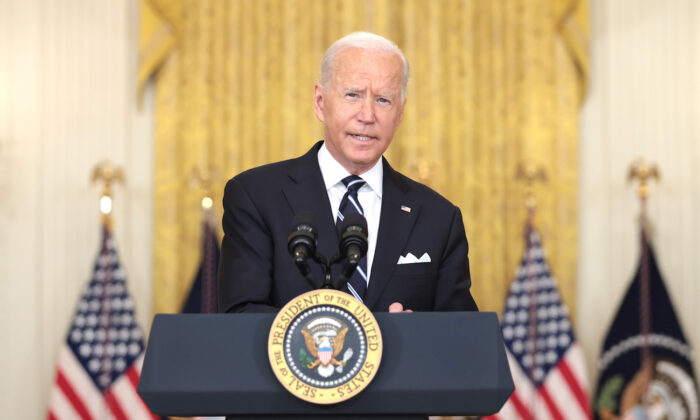 US Troops to Continue Evacuations of Americans in Afghanistan ‘Until We Get Them All Out’: Biden

President Joe Biden said in an interview on Wednesday that his administration plans to keep U.S. troops in Afghanistan until all Americans who seek to leave have been evacuated.

In an interview with ABC News, Biden was pressed by host George Stephanopoulos repeatedly about what the administration will do if Americans and their Afghan allies are still evacuating from Afghanistan after Aug. 31.

In a follow up question, Stephanopoulos asked, “So Americans will have to understand that troops might have to be [in Afghanistan] beyond Aug. 31?” which is Biden’s planned deadline to conclude the U.S. military mission in the now Taliban-ruled country.

“No, Americans should understand that we’re going to try to get it done before Aug. 31,” Biden responded.

“But if we don’t, the troops will stay?” Stephanopoulos asked.

“If we don’t, we’ll determine at the time who’s left,” Biden responded. “And if there’s American citizens left, we’re gonna stay till we get them all out.”

An estimated 10,000 to 15,000 Americans were still in Afghanistan after the Taliban was left full control of the country on Aug. 15 as the U.S.-backed government fled. Biden said the United States will do “everything in our power” to evacuate Americans and U.S. allies.

When asked whether the commitment to stay held for Afghan allies and their families, Biden said, “The commitment holds to get everyone out that, in fact, we can get out and everyone who should come out.”

Stephanopoulos quoted an estimated 80,000 Afghan allies and their families looking to flee the country, while Biden had a lower estimate of 65,000 people.

Separately on Wednesday, the U.S. embassy in Kabul said in a security alert that the U.S. government was not able to ensure safe passage to the airport in Kabul.

“Please be advised that a significant number of individuals have registered and space on these flights is available on a first come, first serve basis. You may be required to wait at the airport for a significant amount of time until space is available,” the embassy added.

The embassy’s message came as Defense Secretary Lloyd Austin told reporters that the U.S. military does not have the capability to expand its current mission from securing the airport to finding and escorting Americans and Afghans who want to flee the country.

He said that 4,500 U.S. troops have been maintaining security at the airport.

He added, “We’re going to work 24 hours a day, seven days a week, and we’re going to get everyone that we can possibly evacuate evacuated. And I’ll do that as long as we possibly can until the clock runs out or we run out of capability.”

Austin said that the pace of the evacuations is “not close to where we want to be.”

Deputy Secretary of State Wendy Sherman, the second-highest-ranking U.S. diplomat, on Wednesday confirmed reports that the Taliban are preventing some Afghans from getting to the airport. Some videos uploaded online showed apparent Taliban members hitting people with sticks and whips who were trying to get into the facility.

“We have seen reports that the Taliban, contrary to their public statements and their commitments to our government, are blocking Afghans who wish to leave the country from reaching the airport,” she said.

National security adviser Jake Sullivan on Tuesday also acknowledged reports that some people were “being turned away or pushed back or even beaten” while trying to travel to Kabul airport.