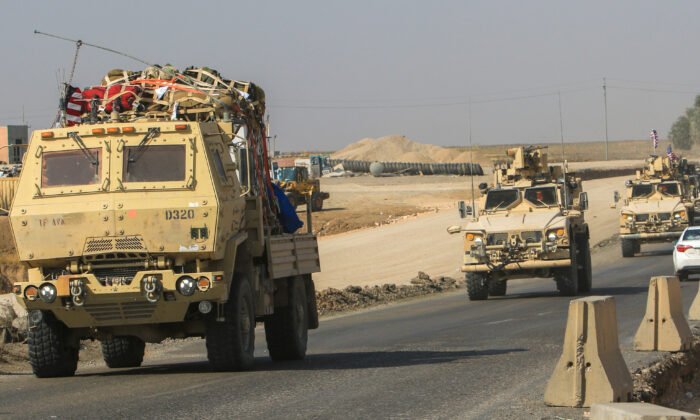 A convoy of U.S. vehicles is seen after withdrawing from northern Syria, on the outskirts of Dohuk, Iraq, on Oct 21, 2019. (Ari Jalal/Reuters)
International

US Troops Welcomed by Civilians in Iraq After Syria Withdrawal

DOHUK, Iraq—U.S. troops have crossed into Iraq from Syria through the Sahela border crossing in the northern province of Dohuk, Reuters witnesses said on Oct. 21.

Video filmed by Rudaw TV shows civilians smiling as they welcomed a U.S troop by the side of the road and children waving as armoured U.S vehicles passed through the Sahela border crossing into Iraq’s northern province of Dohuk.

An Iraqi Kurdish security source also told Reuters that U.S. troops had crossed into the semi-autonomous Kurdistan Region of Iraq.

About 30 trailers and Hummers carrying heavier duty equipment crossed, with troops in cars coming through, the source added. A second security source in Mosul also said U.S. troops had crossed into Iraq from Sahela.

U.S. Defense Secretary Mark Esper said on Saturday that all of the nearly 1,000 troops withdrawing from northern Syria are expected to move to western Iraq to continue the campaign against the ISIS terrorist group and “to help defend Iraq.”

On Thursday, Turkey agreed in talks with U.S. Vice President Mike Pence to a five-day pause in an offensive into northeastern Syria to allow time for the Kurdish fighters to withdraw from a “safe zone” Ankara aims to establish near its border with Syria.

The truce also aims to ease President Donald Trump’s decision this month to withdraw all 1,000 U.S. troops from northern Syria, a move criticized in Washington as a betrayal of loyal Kurdish allies who had fought for years alongside U.S. troops against ISIS.

Critics have said that the U.S. pullout from northern Syria was effectively a green-light for Turkey to launch its mission. President Donald Trump denied those allegations and warned Erdogan of such action on Twitter and via a White House letter.