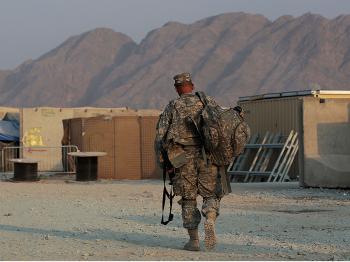 An American soldier walks with his equipment October 27, 2009 at Forward Operating Base Wilson in Kandahar Province, Afghanistan. (Chris Hondros/Getty Images)
US

By Genevieve Belmaker
Print
A series of helicopter crashes and explosive device attacks killed at least 14 U.S. service members and an Afghan civilian earlier this week in several attacks in Afghanistan. Some reports have put the number of dead as high as 19.

According to reports from the U.S. Department of Defense, several other service members were injured and taken to a regional medical facility for treatment.

Icasualties.org, an independent Web site that tracks military casualties in Afghanistan and Iraq, shows that October 2009 is the deadliest month for Americans in Afghanistan since the war began in 2001.

“A loss like this is extremely difficult for the families as well as for those who served alongside these brave service members," said Navy Capt. Jane Campbell, a spokeswoman for NATO’s International Security Assistance Force’s Joint Command in a release. "Our thoughts and prayers are with the families and friends who mourn their loss.”

The Department of Defense has only released details about some of the casualties. Details of killed service members are withheld until family members can be notified.

The 14 Army and Marine Corps personnel were killed in a series of complex improvised explosive device (IED) attacks. According to Pentagon spokesman Marine Corps Col. Dave Lapan, a complex IED attack can refer to the use of several explosives.

“A complex [IED attack] usually is more than one, set up in a way to cause maximum casualties,” said Lapan in a release.

In remarks to servicemen and women at the Naval Air Station in Jacksonville, Florida on Monday, President Obama publicly acknowledged the loss.

“Our people are our most precious resource,” said Obama in the speech. “We're reminded of this again with today's helicopter crashes in Afghanistan. Fourteen Americans gave their lives. And our prayers are with these service members, their civilian colleagues, and the families who loved them.”

In related comments during Tuesday’s White House press briefing, White House spokesman Robert Gibbs fielded questions about the resignation of Foreign Service Officer Matthew Hoh. According to media reports, Hoh, who worked in Afghanistan, sent a letter of resignation to President Obama in protest of the war in Afghanistan.

President Obama will meet with the Joint Chiefs of Staff at the White House on Friday discuss progress on Afghanistan and Pakistan.