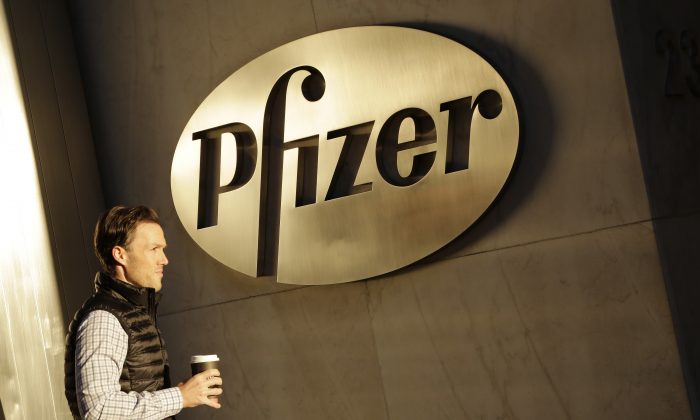 FILE - In this Monday, Nov. 23, 2015, file photo, a man enters Pfizer's world headquarters, in New York. U.S. Republican presidential candidate Donald Trump is railing about what’s wrong in corporate America as he woos voters fed up with the status quo. He is blasting drugmaker Pfizer’s tax-saving plan to move its headquarters overseas, refusing to eat Oreo cookies made in Mexico and vowing to get Apple to make iPhones in the U.S. His tirades about unfair competition, tax evasion and lost jobs trumpet a familiar tune, but going further than many others running for president have dared. (AP Photo/Mark Lennihan, File)
Business & Economy

“The merger agreement between Pfizer and Allergan plc has been terminated by mutual agreement of the companies,” Pfizer stated in a press release on April 6. “The decision was driven by the actions announced by the U.S. Department of Treasury on April 4, 2016, which the companies concluded qualified as an ‘Adverse Tax Law Change’ under the merger agreement.”

Pfizer will pay Allergan a $150 million termination fee as per the merger agreement for reimbursement of expenses associated with the transaction.

Pfizer Inc. (NYSE: PFE) and Allergan (NYSE:AGN) agreed to merge in November 2015 in a roughly $160 billion deal, the largest deal ever for the pharmaceutical sector. The deal was planned to be completed in the second half of 2016.

Through this transaction, Pfizer was planning to move its tax domicile to Ireland, which is a strategy called tax inversion.

The new regulations announced by U.S. Department of the Treasury and the Internal Revenue Service (IRS) are more aggressive than expected and have two parts that affect the Pfizer deal.

First, the Treasury curbs the use of a tax strategy called earnings-stripping. It is a practice to reduce the taxable income of a corporation by paying excessive amounts of interest through internal borrowing.

Through this technique, companies can easily move non-U.S. profits around the world. The new rules aim to restrict related-party debt for U.S. subsidiaries in dealings that do not finance new investment in the United States.

And secondly, the rules make inversions more difficult. This affects Allergan, which has grown in size through inversions since 2013. Allergan, despite its Dublin address, is operated from offices in Parsippany, New Jersey.

“Some companies are serial inverters. They acquire multiple U.S. firms in stock-based transactions over a short period of time. This increases their size and reduces the negative tax consequences of a subsequent inversion. Today’s action takes away a significant amount of the tax benefits of these serial inversions,” said Treasury Secretary Jacob J. Lew on a press conference call on April 4.

Tax inversion, or corporate inversion, is a strategy used to reduce the tax burden of a corporation by relocating its domicile to a lower-tax country.

The transactions involving a tax inversion have been a major driver of global M&A for the past few years, particularly in the pharmaceutical industry.

Shares also fell on April 5 for other companies that have been planning inversion deals: Milwaukee-based Johnson Controls Inc. and Ireland’s Tyco International, that announced a $14.6 billion deal in January; and drugmakers Baxalta Inc. of Bannockburn, Illinois, and ShirePLC of Ireland, which were planning a $32 billion inversion deal.

Tax inversions and the need to overhaul the U.S. tax structure have become a hot issue in the presidential campaign as well. Some candidates called Pfizer and other companies considering such deals “unpatriotic.”

President Obama held a news conference on April 5, saying the Treasury rules are meant to prevent “one of the most insidious tax loopholes out there” and prevent wealthy corporations from shirking their tax responsibility.