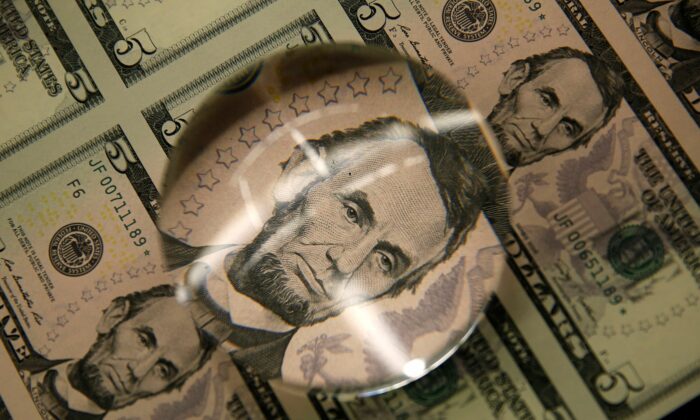 Sheets of former U.S. President Abraham Lincoln on the five-dollar bill currency are seen through a magnifying glass at the Bureau of Engraving and Printing in Wash., on March 26, 2015. (Gary Cameron/Reuters)
Economic Policies

LONDON—U.S. five and 10-year Treasury yields rose to their highest levels in almost three years on Tuesday, ahead of a widely-anticipated rate hike from the Federal Reserve.

The Fed concludes a two-day meeting later on Wednesday and is expected to deliver its first rate increase in three years, in what is likely to be a series of rate increases to tame inflation.

The urgency surrounding the Fed’s policy meeting this week has intensified because inflation has shown no signs of easing and could rise further since Russia’s invasion of Ukraine has driven up oil prices.

“We have priced in a lot already and so far that hasn’t caused big market troubles,” said Jan von Gerich, chief strategist at Nordea.

“But it’s clear that the U.S. inflation outlook calls for more than just a fine-tuning of policy. This (rate-hiking) cycle is going to be a long one.”

U.S. headline inflation is running at almost 8 percent and data on Tuesday showed producer prices rose in February at an annual rate of 10 percent following a similar gain in January.