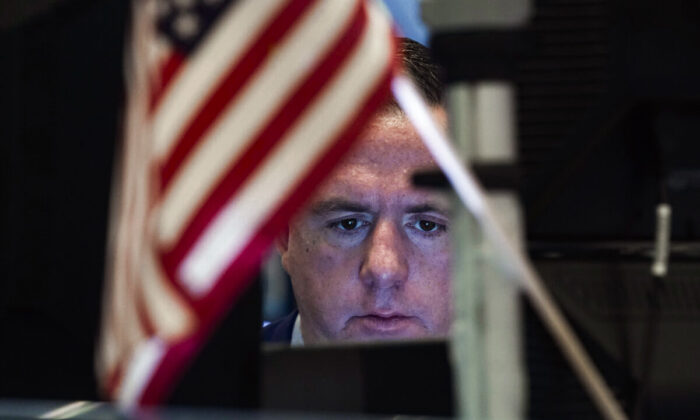 A slightly more upbeat mood was evident early Monday, with 10-year U.S. Treasury yields clawing back some of Friday’s drops that took them below 1.4 percent for the first time since late September. Yields move in the opposite direction to prices.

Wall Street generally appeared poised for more volatility, with S&P 500 futures shedding 0.06 percent and Dow Jones futures up 0.28 percent as of 5:52 a.m. New York time. Futures on the tech-heavy Nasdaq, which led last week’s equities losses, were down around 0.6 percent.

The VIX volatility index, dubbed the Wall Street fear gauge, edged up in pre-market trading Monday, with VIX futures ending the last session up over 10 percent, suggesting more volatility was in store.

Analysts generally described Friday’s jobs report as a mixed bag, with the economy adding an underwhelming 210,000 jobs versus 550,000 forecast, though the unemployment rate fell to 4.2 percent and the labor force participation rate edged up to 61.8 percent.

Investors have been eyeing the Fed for signs of an accelerated timeline for a wind-down of the central bank’s massive bond-buying program, which has provided a tailwind for risk assets like stocks and crypto. Currently the Fed is poised to phase out the asset purchases at a pace of $15 billion per month, which would conclude the taper in June.

The jobs recovery is a key touchstone for the Fed, with the central bank reluctant to pull back on stimulus too quickly to ensure a long economic expansion in order for the labor market recovery to firm up. The U.S. economy remains around 2.4 million jobs below pre-pandemic levels.

Some policymakers, like Federal Reserve Bank of St. Louis President James Bullard, favor a faster taper schedule due to inflation. On Friday, Bullard suggested that any weakness in the jobs report wasn’t significant enough to push the Fed into a slower rollback of stimulus.

“Except for the headline number, the report seemed quite strong across the board,” Bullard told Bloomberg.

Bullard predicted the unemployment rate would fall below 4 percent by the first quarter of 2022, calling the labor market “very strong.”

In separate remarks to reporters on Friday, Bullard said the persistence of inflationary pressures makes a strong case for a faster taper that would wrap up by March, adding that he believes the Fed should raise rates at least twice next year.

“The danger now is that we get too much inflation … it’s time for the [Fed] to react at upcoming meetings” Bullard said.

“The inflation numbers are high enough that I think [ending the taper by March] would really help us to create the optionality to do more if we had to, if inflation doesn’t dissipate as expected in the next couple of months,” he added.

The persistence of upward price pressures and signs of continued labor market recovery have put pressure on Fed policymakers to accelerate their schedule for the taper.

A number of economists have urged a faster timeline, with former Treasury Secretary Larry Summers recommending a five-month taper and Goldman Sachs analysts recently predicting that the persistence of inflationary pressures would force the Fed to double its pace to $30 billion per month, bringing the taper to a close in mid March.