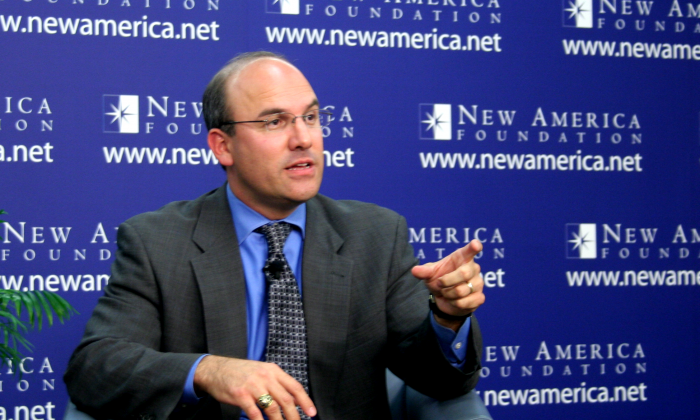 Juan C. Zarate, currently, at the Center for Strategic and International Studies (CSIS), was former senior treasury and White House official. Zarate speaks Oct. 18 at the New America Foundation about his new book, Treasury's War: The Unleashing of a New Era of Financial Warfare. (Gary Feuerberg/ Epoch Times)
US

US Treasury Develops a New Kind of Warfare

WASHINGTON—President Bush said, 13 days after the Sept. 11, 2001 attacks, that the country would use every resource against terrorists. He included finance among the resources. “We will starve the terrorists of funding,” he said.

Juan Carlos Zarate, former deputy assistant to President Bush and deputy national security advisor for combating terrorism was at the center of the action.

Mr. Zarate served as the Assistant Secretary of the Treasury for Terrorist Financing and Financial Crimes, where he led Treasury’s domestic and international efforts to attack terrorist financing, build comprehensive anti-money laundering systems, and expand the use of Treasury powers to advance national security interests.

Zarate wrote “Treasury’s War: The Unleashing of a New Era of Financial Warfare,” which states that he was “the first ever assistant secretary of the Treasury for the terrorist financing and financial crimes.”

He said that in the 21st century, financial warfare broadens one’s thinking of doing battle with the enemy. It’s not simply defeating the “trigger puller or suicide bomber at the end of the chain, but looking at the lifecycle or business cycle of a terrorist organization more broadly.”

Financial power is no longer ancillary to military power or law enforcement or diplomacy but “a power onto itself”—“a clear complement to the other powers,” according to Zarate.

”Can you impact the strategic thinkers who are launching the plan or devising a budget for a group like al Qaeda?” Can the direct donors or investors of terrorists groups be impacted? Can the more passive donors, who have legitimate businesses and may not even be aware that their donations to front charities are being used for terrorism be impacted?

Zarate said that it boils down to the fact that any group that can impact American national security must have access to the global financial system. This need invariably involves banks.

The new world of financial warfare galvanizes “the financial commercial globalized system to isolate these actors from that world,” said Zarate.

The private sector has a crucial role. “Banks in this new world are the guardians of the gate of the financial system. They’re the ones who are going to determine whether they are going to do business with the [Iranian] Revolutionary Guard,” he said.

At the Treasury Department, the Office of Foreign Asset Control (OFAC), was “perhaps the most powerful yet unknown agency in the U.S. government,” wrote Zarate. It could not only seize assets but could bar parties from the U.S. financial system.

OFAC’s reach is international because of “the United States’ status as the “principal capital and banking market worldwide.” A global institution will need to access New York and the American banking system, he wrote.

It helps that the U.S. dollar is the “principal reserve and trading currency around the world.”

The new use of financial power began with the campaign to combat al Qaeda’s financing. Treasury officials analyzed the source of al Qaeda’s funding used for recruitment, training, operations and propaganda. The terrorists needed to collect and move money, and to pay pensions to widows and families of suicide bombers.

So Treasury set about mapping out the al Qaeda network with the aim of disrupting it and constricting its reach.

Complicating matters, terrorist-related funds “are often commingled with money raised for legitimate causes.” Freezing such assets can give the perception that U.S. policy intends to extinguish Islamic charities, he wrote.

Eventually, Treasury, with international cooperation, was able to make it very “difficult for al Qaeda to raise, control, and move money.”

North Korea is hard to sanction because it’s already isolated, we don’t trade with it, and it doesn’t have bank accounts here.

However, North Korea does rely on the international banking system. In 2005 there was one bank in particular, Banco Delta Asia, in Macau, a Special Administrative Region of China, which was used for laundering money for North Korea’s illicit businesses.

Treasury was armed with section 311 of the Patriot Act of 2001, which allowed it to go after foreign accounts that are a “primary money laundry concern,” states the law. A simple regulatory action had a “ripple effect” in the international finance community that “led to the most severe financial isolation that North Korea had ever seen,” Zarate said.

By April 2006, the bank was closed after $25 million in North Korean accounts were frozen, and other banks in China and elsewhere had closed North Korean accounts. For the first time in recent memory, Zarate said, North Korean officials called the U.S. “and for two years after that, they started and ended every conversation with, ‘We want our money back.’”

“Really what they wanted back was the ability to transact with the banking system in the [international] community,” he said. The tool of section 311 worked because of “the aversion of the financial community to do business with North Korea and illicit financial activities they were engaged with,” he said.

In a conversation between a North Korean negotiator and a White House negotiator, Zarate said that the former said in confidence, “You finally found a way to hurt us.”

However, Treasury’s North Korean action in some respects was too effective, and the financial harm inflicted “began to complicate diplomacy,” he said.

An important lesson from the North Korean example can be applied today to Iran where, as in North Korea, the financial campaign may start to diverge from the diplomatic track. The Iranians also want to be connected again with the international financial system.