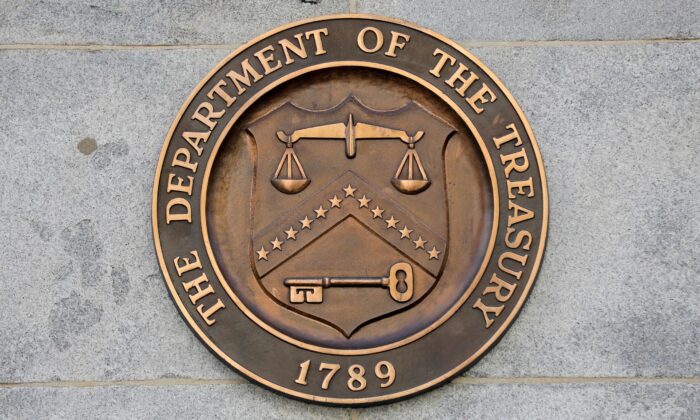 Signage is seen at the Department of the Treasury headquarters in Washington, on Aug. 29, 2020. (Andrew Kelly/Reuters)
Markets

LONDON—Investors pumped money into U.S. Treasuries at the fastest pace in nearly two years in the week to Wednesday and yanked funds out of cash, inflation-linked debt, and credit as recession risks rose, BofA’s weekly flow report showed on Friday.

Global equities saw a small $2.2 billion of inflows while investors pulled a massive $79.4 billion from cash and $11.8 billion from bonds, according to BofA which is analyzing EPFR data.

“In the next 6 months … rates shock morphs into recession shock,” BofA analysts led by Michael Hartnett said in a client note.

Among notable weekly highlights, U.S. Treasuries saw the biggest inflows since March 2020 at $7.4 billion while the combined outflows from investment grade, high yield, and emerging markets were the largest since April 2020.

Tech funds saw the biggest inflows in five weeks at $0.7 billion while emerging market equities saw inflows to the tune of $3.3 billion in an eighth consecutive week of inflows, the U.S. investment bank said.