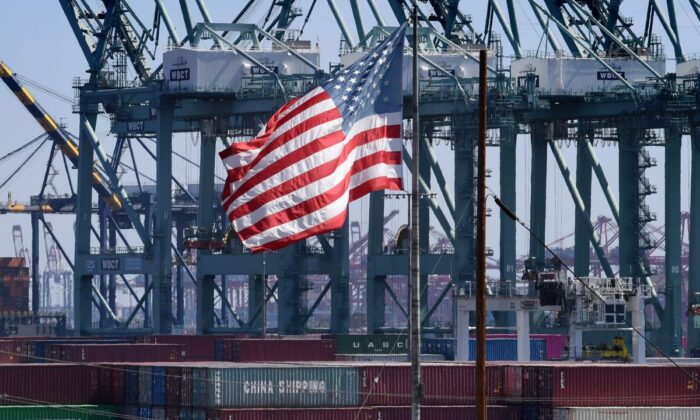 The U.S. flag flies over Chinese shipping containers that were unloaded at the Port of Long Beach, in Los Angeles County on Sept. 29, 2018. (Mark Ralston/AFP/Getty Images)
Economy

'Decoupling is evident from the dramatic reduction in the US goods trade deficit with China,' says trade expert Alan Tonelson
By Tom Ozimek

Decoupling is the realignment of trade links, including supply chains, and so reducing America’s reliance on Chinese imports, among other aims. It also makes the nation less vulnerable to economic contagion, such as that which may be inflicted on global economies from the outbreak of the coronavirus epidemic in China.

The risk of economic woes spilling across the border of an already slowing China as it struggles to contain the virus, which now carries the official designation COVID-19, was a threat highlighted in Tuesday’s Congressional testimony by Fed Chair Jerome Powell.

“We are closely monitoring the emergence of the coronavirus, which could lead to disruptions in China that spill over to the rest of the global economy,” Powell said in prepared remarks.

The epidemic would likely have some effect on the U.S. economy, he said, but it was too early to tell if it would be significant enough to merit a response from the Fed.

“The question we will be asking is will these be persistent effects that could lead to a material reassessment of the outlook,” Powell told the House Financial Services Committee in Washington, during the semi-annual testimony on the Fed’s monetary policy.

Figures released by the Bureau of Economic Analysis (BEA) on Feb. 5 show a range of what Alan Tonelson, who founded the public policy blog RealityChek and has written widely on trade and economic policy, calls “encouraging highlights.”

Tonelson told The Epoch Times in an emailed statement that one of these policy bright spots is that the overall U.S. trade deficit fell year-on-year in 2019, which was one of Trump’s signature campaign promises.

Further, the BEA numbers show a reduction in America’s annual goods deficit with China—another of the administration’s objectives—by a record 17.62 percent last year. Also, despite the problems facing Boeing, which is an important contributor to trade surpluses, America’s manufacturing deficit has stabilized significantly.

Tonelson added that a key validation of the effectiveness of this administration’s trade policies is that the U.S. economy continued to grow last year “even as that portion of the trade deficit most influenced by trade policy increased at a particularly slow rate.”

“The obvious conclusions? Trade policy can influence the size and rate of change in the trade deficit, and that the Trump trade policies are working,” he said.

BEA figures show that value of total merchandise trade between the United States and China fell by more than 18 percent to $558.87 billion, the lowest level since 2012.

“Decoupling the U.S. economy from China’s is crucial for U.S. prosperity, because the pre-Trump policy of expanding trade and commerce with the People’s Republic has been such a net loser for the American economy,” Tonelson said. “And it’s crucial for U.S. national security because the pre-Trump policies recklessly transferred so much in the way of resources and defense-related technology to an increasingly hostile and aggressive China.”

Domestic factory output data for 2019, which has yet to be released, will allow a comparison between moves in the trade deficit level and the overall growth of industry, serving as another useful datapoint in gauging the state of American manufacturing.