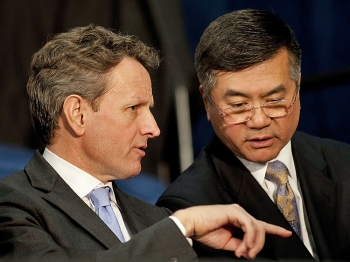 DISADVANTAGE: US Treasury Secretary Timothy Geithner (L) speaks with US Commerce Secretary Gary Locke during a small business forum in Cleveland, Ohio on Feb. 22. Both Locke and Geithner have been vocal in criticizing China's unfair business practices, which often put American enterprises at a disadvantage. (Jim Watson/Getty Images )
Business & Economy

“This imbalance of opportunity is a major barrier to continued improvement of the United States and China’s commercial relationship. And it is part of a broader trend of China recently narrowing its commercial environment after a long and fruitful period of opening,” said the former Washington state governor in a statement.

“When over 80 percent of all software installed on computers in China is counterfeit and when first-run movies continue to appear on rogue websites as soon as they show up in the theaters—then we know the problem is still grave,” Locke said at an event on Capitol Hill acknowledging the World Intellectual Property Day.

Treasury Secretary Timothy Geithner has urged Beijing to opt for a more market-oriented exchange rate and to be more equitable in its dealings with foreign businesses. Geithner has pressed China to drop protectionist policies that are disadvantageous to American enterprises operating in the Chinese market.

U.S. Trade Representative Ron Kirk has also been vocal about counterfeiting in China and other regions, calling for better enforcement of intellectual-property rights across the globe.

Although Locke has been critical of the Chinese communist regime, President Barack Obama has nominated him to be the next ambassador to China, a post that will need confirmation by the Senate. The current ambassador is John Huntsman, former governor of Utah. According to reports, Huntsman is considering a run for president in 2012.