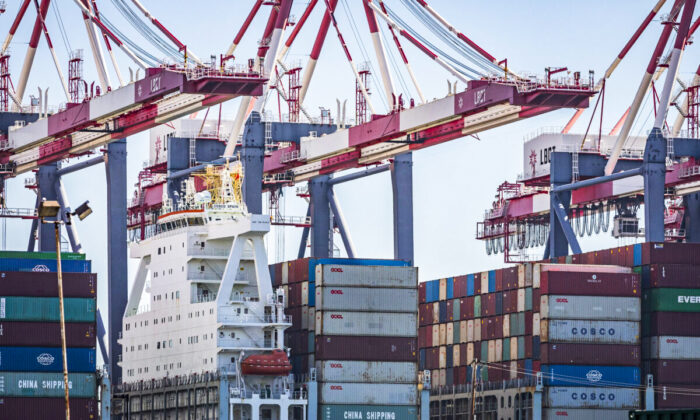 A cargo ship awaits the offloading of shipping containers in the Port of Los Angeles on Oct. 27, 2021. (John Fredricks/The Epoch Times)
Economy

The U.S. trade deficit expanded drastically in November, driven by a record surge in imports of foreign goods, according to new data from the U.S. Bureau of Economic Analysis in collaboration with the U.S. Census Bureau.

The government findings indicate that the trade deficit jumped to $80.2 billion in the penultimate month of 2021, constituting a 19.4 percent rise in the total trade gap.

This dynamic was driven by a stark increase in goods imports, which rose 5.1 percent to a total of $254.9 billion, likely a result of reduced congestion at American ports and from last year’s lucrative holiday shopping season. Industrial goods and materials led among categories of goods imported with a $5.9 billion increase, followed by consumer goods with $3 billion. Goods exports declined by a less drastic 1.8 percent, bringing the total to $155.9 billion.

The phenomenon was less severe in services, with service imports increasing by a more modest $1.1 billion and service exports also rising by $2.2 billion.

With the findings from November, the United States appears on track to post a record annual trade deficit in next month’s report, which will include data from December.

Among the reasons for last year’s growth in trade imbalance was the apparent recovery of the U.S. economy from the CCP (Chinese Communist Party) virus pandemic.

With influxes of stimulus money, American consumers have been able to purchase imported goods, driving up overall import totals even as exports remained mostly stagnant. However, the economy overall remains beset by supply chain woes, labor shortages, and inflation, and it is unclear whether GDP growth is sustainable or even accurate to the true health of the economy. At the current rate, growth in the trade deficit has begun to raise alarm among some economists, who fear that it may weaken the U.S. dollar at a time of record inflation.