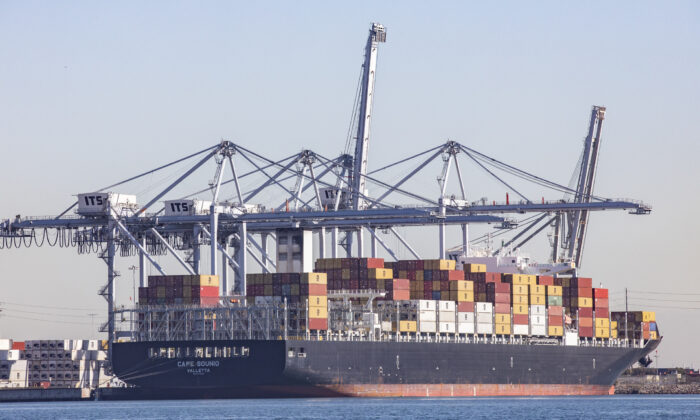 The U.S. trade deficit in goods rose in December on the back of an import surge to hit a monthly record high, while bringing the total shortfall for all of 2021 to more than $1 trillion, also a historic first.

The trade deficit in goods—or the difference between imports and exports of products—rose by a monthly 3 percent in December to an all-time high of $101 billion, the Commerce Department said in a Jan. 26 statement (pdf). The previous record was set in November, when the trade gap climbed to $98 billion.

The first 11 months of 2021 saw the goods deficit climb to $984.8 billion, with December’s reading pushing that figure above a psychological $1 trillion barrier.

“The 1st ever monthly goods trade deficit to exceed $100 billion resulted in a $1.08 trillion deficit for 2021, the 1st year to top $1 trillion,” economist Peter Schiff wrote in a Twitter post, in which he argued that the numbers make a case for the current bout of inflation being driven less by supply-side dislocations and more the result of loose monetary and fiscal policies.

“So prices aren’t rising due to a shortage of goods but a surplus of money. The real goods shortage will arrive after the dollar crashes!”

Surging inflation, which has emerged as an unwelcome corollary of the stimulus-fueled rebound from the pandemic recession, has prompted the Federal Reserve to accelerate the pace of dialing back its loose monetary settings. Fed Chair Jerome Powell struck a hawkish note on Jan. 26, telling reporters after a two-day policy meeting that officials are looking to start boosting rates in March to tame runaway prices.

The Commerce Department report also showed a rise in both wholesale and retail inventories during December, as businesses sought to bolster inventories in the face of strong consumer demand. Solid inventory accumulation could offset some of the effects on GDP from the larger trade deficit.