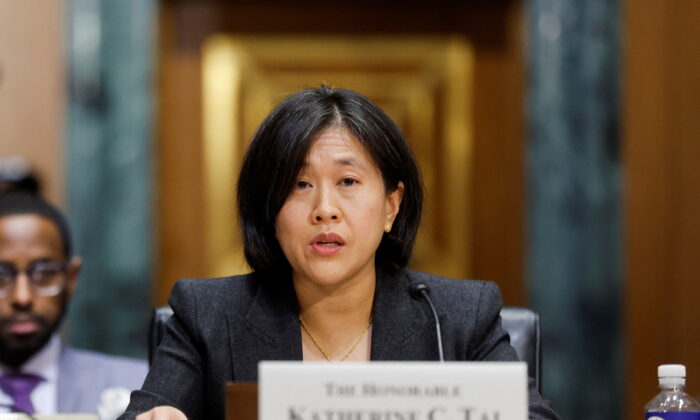 WASHINGTON—U.S. Trade Representative Katherine Tai on Thursday declined to say if Taiwan would be invited to join the Biden administration’s Indo-Pacific economic plan, spurring Senate criticism that excluding the island would be a missed opportunity.

Taiwan has voiced its desire to be a “full member” in the forthcoming Indo-Pacific Economic Framework (IPEF), which is one part of the administration’s effort to counter what it says is Beijing’s increasing economic and military coercion in the region.

The administration says the still fledgling IPEF aims to be inclusive, but it has not publicly detailed any membership plans. IPEF is intended as a flexible economic framework that would align members on supply chain security, infrastructure, labor standards, green energy, and other issues.

Tai, testifying before the Senate Finance Committee, called Taiwan an essential partner, but that no decisions had been made on membership.

“On the point of Taiwan, we are in general in conversations with those who are interested in joining this framework,” Tai said when asked by Sen. Bob Menendez (D-N.J.) if the island would be invited to join the framework.

“Participation in the IPEF is still under consideration, and as far as I’m aware no decisions have been made,” said Tai, the U.S.-born daughter of immigrants from Taiwan.

Menendez responded that the democratically governed island claimed by the Chinese regime was a key strategic and trading partner intertwined with U.S. economic security.

“I get a sense from that answer that we will not include Taiwan within the IPEF, which is missing an opportunity,” he said.

The exchange followed a March 30 letter from 200 members of Congress from both parties, including Republicans Michael McCaul, Liz Cheney, and Elise Stefanik, and Democrats Ted Lieu, Ro Khanna, and Elissa Slotkin, urging Tai and U.S. Secretary of Commerce Gina Raimondo to invite Taiwan to join IPEF.

“Taiwan’s inclusion would also send a clear signal that the United States stands with its allies and partners, and will not be bullied by the PRC,” the representatives said, referring to the People’s Republic of China.

The letter was posted on the official Congress website of Democratic Congressman Albio Sires, who also signed it.

Some analysts argue Taiwan’s participation in the plan could make countries in the region hesitant to join for fear of retaliation from the Chinese regime.

The Commerce Department referred a Reuters request for comment to the White House National Security Council, which also said no decisions had been made on membership.

A spokesperson for Taiwan’s de-facto embassy in Washington said: “Regarding IPEF, Taiwan continues to exchange views with the U.S. through existing economic and trade mechanisms and channels.”

Though it doesn’t have formal ties with Washington, Taiwan is one of Asia’s most vibrant democracies and economies, and is a dominant producer of semiconductors crucial to global supply chains.