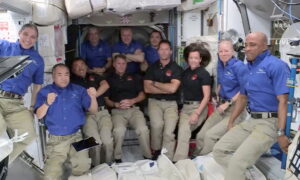 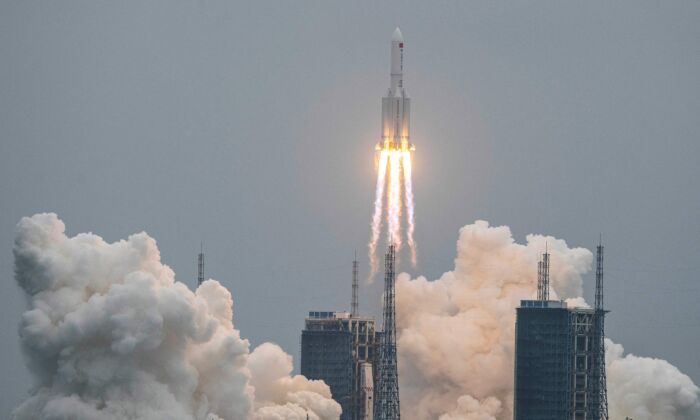 US Tracking China Rocket Debris That May Reenter Atmosphere in Days

The U.S. Space Command is tracking debris from a Chinese rocket that sent part of a planned space station into orbit last week and may reenter Earth’s atmosphere this weekend, the White House said on May 5.

The debris comes from the Long March 5B rocket launched on April 29 to deliver a new roughly 25-ton module for China’s Tianhe space station. The debris has since reached orbital velocity, meaning it’s circling the planet instead of falling back to Earth within a predetermined area as usually happens with the debris from U.S. launches.

Losing its ability to restart its engines, the debris is tumbling on a trajectory toward Earth at more than 17,000 miles per hour and its reentry point can’t be accurately predicted yet.

“Its exact entry point into the Earth’s atmosphere cannot be pinpointed until within hours of its reentry, which is expected around May 8,” U.S. Department of Defense spokesman Mike Howard said in a statement on May 4. “We will provide additional information as it becomes available.”

“The United States is committed to addressing the risks of growing congestion due to space debris and growing activity in space and we want to work with the international community to promote leadership and responsible space behaviors,” White House press secretary Jen Psaki said at a news briefing.

The debris, measuring 98 feet (30 meters) long and 16 feet (5 meters) wide, will partially burn up as it collides with molecules while reentering Earth’s atmosphere.

Because the module’s orbital inclination is 41.5 degrees, the debris is anticipated to reenter the atmosphere in a range somewhere between a little farther north than New York, Madrid, and Beijing, and as far south as southern Chile or Wellington, New Zealand.

The Long March 5 series is China’s most powerful rocket and has been launched seven times in history. The Wenchang Space Launch Center in southern China’s Hainan Province is its official launch center.

The Chinese regime announced the launch on April 29 as a success.

This isn’t the first time debris from Chinese space missions has fallen uncontrollably back to Earth.

In 2017, a Long March 5B rocket had a failed launch after one of two core engines failed shortly after take-off, Chinese state media reported. The rocket fell back to Earth from the atmosphere.

In 2018, China’s Tiangong-1 defunct space station reentered the earth’s atmosphere and mostly burned up over the middle of the South Pacific near Tahiti, which likely created a “gorgeous and magnificent” show, the Chinese space authority reported.

Last year, another Chinese Long March 5B rocket fitted with a prototype version of China’s next-generation crew capsule tumbled back to earth. It was the largest object to fall out of orbit in decades.

The Chinese regime is preparing to send a crewed spaceship—Shenzhou 12—to dock with the Tianhe in June. Chinese media reported on April 15 that the Long March 2F rocket and the spacecraft were shipped to the Jiuquan Satellite Launch Center in northwestern China’s Gansu Province to be readied for the launch.