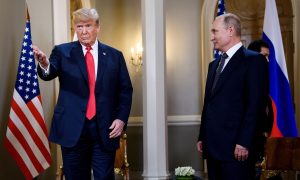 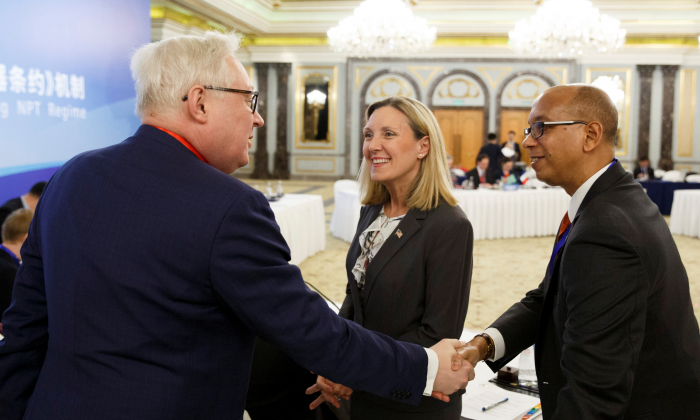 The United States will stop complying with the Intermediate-Range Nuclear Forces Treaty with Russia as soon as Feb. 2, after the Kremlin refused to address its long-standing violations in the latest round of talks, a senior U.S. arms control official said Jan. 31.

Wаshington has long alleged that Moscow violated the treaty by testing and deploying the Novator 9M729 missile, which is called the SSC-8 by NATO. The Intermediate-Range Nuclear Forces (INF) Treaty prohibits Russia and the United States from possessing short- and mid-range ground-launched missiles.

Russia ignored the accusations for years, but altered course recently after Washington disclosed the codename of the missile, suggesting that it’s in possession of intelligence on the weapon’s capability. Moscow now denies that the weapon operates in the prohibited range.

In a last-ditch effort to preserve the treaty, top Russian military officials unveiled the missile to the public on Jan. 23. Russia alleges that the United States is using the accusations as a pretext to quit the treaty.

U.S. Undersecretary of State for Arms Control and International Security Andrea Thompson held last-ditch talks with Russian Deputy Foreign Minister Sergei Ryabkov in Beijing on Jan. 31, ahead of the expiration of a U.S. 60-day deadline for Moscow to return to compliance with the treaty. Thompson and Ryabkov, who met on the sidelines of a P5 meeting of nuclear powers, said afterward that the two countries had failed to bridge their differences.

In an interview, Thompson said she expected Washington to now stop complying with the treaty as soon as Feb. 2, a move she said would allow the U.S. military to immediately begin developing its own longer-range missiles if it chooses to do so.

“We’ll have an announcement made, follow all the steps that need to be taken on the treaty to suspend our obligations with the intent to withdraw,” Thompson said.

“We are then also able to conduct the R&D and work on the systems we haven’t been able to use because we’ve been in compliance with the treaty,” said Thompson.

Washington remains open to further talks with Moscow about the treaty regardless, she added.

Ryabkov said Moscow would continue to try to reach an agreement despite the failure of the talks, but accused Washington of ignoring Russian complaints about U.S. missiles and of adopting what he called a destructive position.

“The United States imposed a 60-day period during which we had to fulfill their ultimatum,” the Sputnik news agency cited Ryabkov as saying after talks with Thompson. “I conclude that the United States was not expecting any decision and all this was a game made to cover their domestic decision to withdraw from the INF Treaty.”

When announcing the 60-day deadline in December last year, Secretary of State Mike Pompeo noted that European allies lobbied Washington for the extra time in order to mount a diplomatic effort to persuade Moscow to return to compliance. NATO formally declared that Russia is in “material breach” of the treaty, in tandem with Pompeo’s ultimatum.

After Russia unveiled the SSC-8 missile, the United States rejected the display as proof of compliance. Moscow also rejected Washington’s proposal to test the missile.

President Donald Trump announced his intention to withdraw from the treaty in October. The president noted at the time that he is open to a new pact, which includes China. Beijing has developed a vast arsenal of missiles, which the United States and Russia can’t develop or deploy under the INF, a new strategic reality that is a concern for both the Kremlin and the White House.

Russia began openly complaining that other countries aren’t bound by the INF in 2005. According to congressional testimony by Steven Pifer, a disarmament expert at the Washington-based Brookings Institution, by 2012, 10 countries had developed missiles with ranges prohibited by the treaty—China, Egypt, India, Iran, Israel, North Korea, Pakistan, Saudi Arabia, South Korea, and Syria. None of those missiles could reach the United States, yet were capable of striking Russia.

“The complaints continued throughout the Bush administration, and at some point, the complaints turned into noncompliance,” Colin Gray and Matthew Costlow wrote in an argument for withdrawing from the INF.