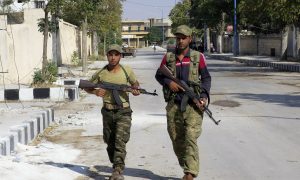 In Long and Bloody Syria War, This Truce May Be Different
0 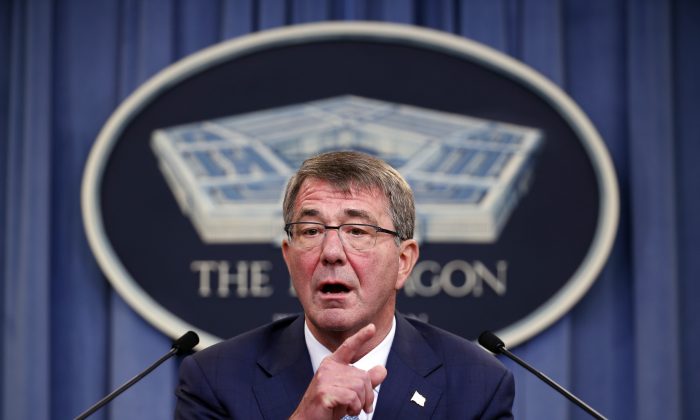 FILE - In this June 30, 2016 file photo, Defense Secretary Ash Carter speaks during a news conference at the Pentagon. The U.S. military will have to shift surveillance aircraft from other regions and increase the number of intelligence analysts to coordinate attacks with Russia under the Syria cease-fire deal partly in order to target militants the U.S. has largely spared, senior officials say. (AP Photo/Alex Brandon, File)
International

US to Shift Military Assets to Syria Under Deal

WASHINGTON—The U.S. military will have to shift surveillance aircraft from other regions and increase the number of intelligence analysts to coordinate attacks with Russia under the Syria cease-fire deal partly in order to target militants the U.S. has largely spared, senior officials say.

Senior defense and military officials told The Associated Press that they are sorting out how the U.S.-Russia military partnership will take shape and how that will change where U.S. equipment and people will be deployed. They said, however, that they will need to take assets from other parts of the world, because U.S. military leaders don’t want to erode the current U.S.-led coalition campaign against the Islamic State group in Iraq and Syria.

More military planners and targeting experts will be needed to identify and approve airstrikes against the al-Qaida-linked Jabhat Fatah al-Sham. The U.S. has rarely bombed the group, previously known as the Nusra Front, and the targeting is trickier because the militants are often intermingled with other U.S.-backed Syrian rebels.

US Says It Destroyed ISIS Chemical Threat in Iraq

Making matters more complicated are U.S. military concerns about Russian targeting. Unlike the U.S., which uses precision-guided munitions, Moscow has predominantly used so-called dumb bombs in its airstrikes over Syria.

The Syria cease-fire deal struck by U.S. Secretary of State John Kerry and Russian Foreign Minister Sergey Lavrov is designed to bring a pause to the civil war so that the superpowers’ militaries can be jointly concentrated against the Islamic extremist groups operating within the chaos on the ground. The concerns reflect the U.S. military’s broader skepticism about partnering with Russia, which it says it distrusts.

Senior U.S. defense and military officials familiar with the planning spoke on condition of anonymity because they weren’t authorized to talk about the matter publicly.

Under the deal, if the cease-fire holds for seven days and humanitarian deliveries are allowed into areas besieged by the Syrian army, the U.S. and Russia would set up a so-called Joint Implementation Center to focus on the militants and share basic targeting data.

“I don’t think that anyone in the U.S. government is necessarily taking at face value Russia’s or certainly not the Syrian regime’s commitment to this arrangement,” Toner said. “I also think some of the comments from the Department of Defense were just about speaking to the fact that there’s logistical challenges of setting up the JIC (joint center) and coordinating these airstrikes and that’s going to require additional effort and additional time.”

He added, however, “What really matters here is that the president of the United States supports this agreement, and our system of government works in such a way that everyone follows what the president says.”

U.S. defense officials said they have begun working out some of the details, even though they are hamstrung by existing U.S. law that prohibits any military-to-military relations with Russia in the aftermath of Moscow’s annexation of the Crimea region of Ukraine.

Defense Secretary Ash Carter must submit a waiver to Congress along with a report detailing why military cooperation with Russia is necessary. U.S. officials said Carter hasn’t done that yet, and he likely won’t until the required cease-fire and humanitarian aid conditions are met for seven days.

Until then, officials said the U.S. military team setting up the JIC will not be able to meet with their Russian counterparts. The U.S. officials laid out a number of questions that must be resolved before any targeting could start, including how much control either country may have over strikes taken by the other, how the review process will unfold and the question of whether either Washington or Moscow will have a veto over any target in dispute — and who would be the final arbiter in any such disagreements.

A key question will be where the military will get the additional surveillance aircraft needed. Drones, in particular, are in high demand around the world, and commanders in volatile regions including Asia and the Middle East, won’t be eager to give up theirs.

The U.S. hasn’t targeted much in some portions of Syria, including around Aleppo and regions where al-Qaida-linked militants are centered. The additional surveillance and analysis will be needed to identify and vet those targets to ensure friendly forces and innocent people aren’t mixed in.

Military officials said that even once the proposed U.S.-Russian center is set up, airstrikes won’t start happening immediately. They said it will take time to share and analyze the recommended target data and make certain that innocent civilians or allies aren’t hit.

It can take weeks for a particular enemy target to get approved and added to the air-tasking order that the U.S.-led coalition uses to assign airstrikes in Iraq and Syria.