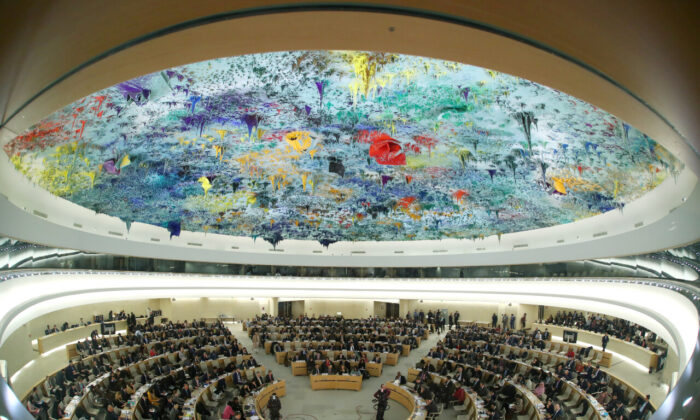 Overview of the session of the Human Rights Council during the speech of UN High Commissioner for Human Rights Michelle Bachelet at the United Nations in Geneva, on Feb. 27, 2020. (Denis Balibouse/File Photo/Reuters)
US-China Relations

The Biden administration will vie for a seat on the U.N. Human Rights Council, U.S. Secretary of State Antony Blinken announced on Feb. 24, unwinding the Trump administration’s decision to withdraw from the body in 2018.

Blinken, in a video message to the council, said the United States would seek election to the U.N.’s top human rights body for the 2022-24 term.

He acknowledged that the Geneva-based body was in need of reforms, including its “disproportionate focus” on Israel—the only country whose rights record comes up for scrutiny at every one of its thrice-yearly meetings—as well as its membership.

Countries “with the worst human rights records should not be members of this Council,” Blinken said.

The Trump administration pulled out from the council in mid-2018 over its excessive focus on Israel, which has received the largest number of critical council resolutions against any country by far.

It also denounced the membership of the council, which includes some of the world’s worst human rights abusers. The 47-nation council currently includes China, Cuba, Eritrea, Russia, and Venezuela—all of which are perpetrators of rights violations. Then-U.N. Ambassador Nikki Haley at the time called the body “a protector of human rights abuses, and a cesspool of political bias.”

Last year, the body drew harsh criticism for appointing China to a panel that helps select the council’s rights investigators, a move described at the time by an advocate as akin to “making a pyromaniac into the town fire chief.”

Blinken, in a separate statement, acknowledged challenges with the body, but noted that “improving the Council and advancing its critical work is best done with a seat at the table.” The statement, released after the secretary of state’s speech to the U.N. Human Rights Council, didn’t explicitly mention China or its human rights abuses.

In response to a query from The Epoch Times about whether the United States would raise the subject of the Chinese regime’s abuses at the council, a State Department spokesperson said the administration “will focus on advancing resolutions and supporting joint statements that promote accountability for human rights violations and abuses globally, especially those highlighting the deteriorating human rights conditions in China.”

Elections for three-year membership on the 47-member council are due at the U.N. General Assembly in October.

Blinken said in the speech that the United States would “call out abuses in places like Venezuela, Nicaragua, Cuba, and Iran.” He also reiterated the U.S. call on Russia to release opposition figure Alexei Navalny as well as hundreds of others detained during protests.

“We will speak out for universal values when atrocities are committed in Xinjiang or when fundamental freedoms are undermined in Hong Kong,” he said, referring to the Chinese regime’s detention of more than 1 million Uyghur Muslims in the far-western Xinjiang region, and Beijing’s growing suppression of Hong Kong.

On Feb. 22, the regime’s Foreign Minister Wang Yi addressed the council via video message denying it was committing genocide or repressing Muslim minorities in Xinjiang. He also said the regime has a “people-centered” approach to human rights.

The Trump administration in January designated the Chinese Communist Party’s (CCP) atrocities in Xinjiang as a genocide, a declaration followed by the Canadian parliament, which passed a unanimous motion on Feb. 22.

Haley, in a tweet on Feb. 24, said: “The U.S. should not give credibility to the sham U.N. Human Rights Council. A group that covers for the world’s worst human rights violators and spends most of its time attacking Israel.”

Earlier this month, a group of 45 Republican House lawmakers sent a letter to President Joe Biden asking him not to rejoin the body that has adopted zero resolutions condemning countries such as China, Russia, Cuba, and Pakistan between 2006 and 2019.

“We believe President Trump was right to withdraw the United States from the Human Rights Council. The United States’ participation in this body has not led to any meaningful reforms,” they wrote.

This article was updated to include a statement from a State Department spokesperson.