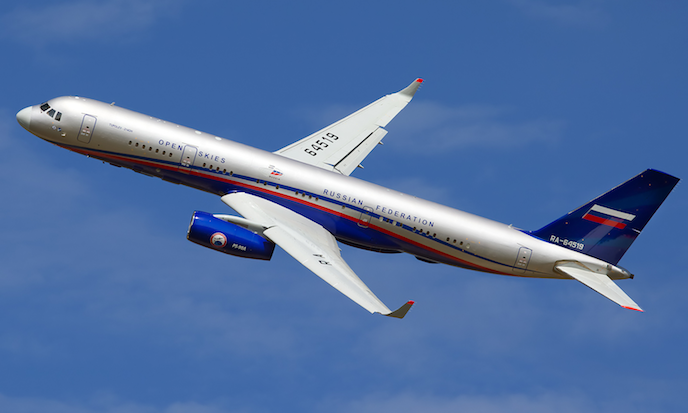 A Russian Air Force Tupolev Tu-214ON at Ramenskoye Airport in August, 2011. Russia flies the plane over military installations in United States under the Open Skies treaty meant to build trust and maintain transparency between Cold War opponents. The treaty comes under new strains as the United States imposes restrictions on Russia, alleging the Russian Federation has not met its compliance obligations under the treaty. (Oleg Belyakov/Wikimedia Commons)
US News

Russian spy planes once welcomed to fly over U.S. military installations are set to face new restrictions as a treaty meant to build trust between Cold War enemies comes under strain.

A State Department official told the Epoch Times the United States has “long had concerns about Russia’s implementation of the Open Skies Treaty.”

“After repeated, unsuccessful attempts to engage Moscow diplomatically, we have elected to take some reasonable and comparable steps in response to Russia’s non-compliance.”

Under the Treaty on Open Skies, 34 countries permit each other to fly spy planes over each other’s military bases and then share the photos. The treaty was created after the Cold War to create transparency on military personnel and equipment, allowing former rivals to “trust, but verify.”

Now, the United States will limit Russian access to American airspace, though the State Department would not comment on if those new restrictions would apply to flights over Hawaii and Alaska.

The official said it hoped that the new restriction would encourage Russia to deal with U.S. concerns more constructively.

“We’re ready to reverse these measures at any time, should Russia come back into compliance with its Open Skies Treaty obligations.”

Russian officials, speaking to Russian state-run media on the morning of Tuesday, Sept. 26, were already reacting to the possibility of restrictions and warning of retaliatory measures.

The treaty has always been contentious, but the current slide began as tensions between the United States and Russia have risen in recent years.

When Russia upgraded its spy planes participating in Open Skies flights to use four-band digital sensors, some U.S. defense personnel worried it allowed them to collect information a level of detail not available to U.S. aircraft as of late March last year.

While Russia has limited satellite capability, the United States gets enough information from satellites to have prompted a debate in Congress about the value of the program altogether.

Meanwhile, the U.S. State Department has been detailing Russia’s failures to comply with the treaty in annual reports.

Under the treaty, nations get a quota of flights they can fly over each other’s territory. But Russia began restricting that flight distance to 500km for all flights over Kaliningrad since 2014.

“U.S. experts have determined that 500 kilometers is insufficient to enable the United States to observe Kaliningrad in its entirety in one flight,” warns the State Department’s 2016 adherence report.

That distance is less than half what is needed to cover the exclave, leaving Russia the ability to move weapons or other assets out of the flight path and thereby prevent treaty members from getting an accurate picture of Russian military assets, comprising the purpose of the treaty.

Kaliningrad is Russia’s territorial outpost on the Baltic Sea, an exclave cut off from the rest of Russia that lies between Poland and Lithuania.

The exclave has strategic value, giving Russia an important platform to project power. It was home to the Soviet’s Baltic fleet in the 1950’s and recent information indicating military buildup there has given cause for concern, according to a report in the Wall Street Journal.

“There have been reports about all kinds of sophisticated radar systems—air defense, area denial capabilities—designed to keep NATO warships and airships away,” Michael Carpenter, a former Deputy Assistant Secretary of Defense with responsibility for Russia, Ukraine, and Eurasia told the Wall Street Journal. “If they have that sort of weaponry, we would like to have more transparency about what is there.”

Russia has also refused treaty members access to a ten-kilometer corridor along its border with the Georgian regions of South Ossetia and Abkhazia since 2010, areas affected by the Russia-Georgia war of 2008. As noted in a State Department Report.

In other instances, Russia has invoked force majeure—an international law term that refers to a force or event beyond a State’s control—to limit observation flights due to the presence of high-level officials in the observation area.

“As for the claims against us, we do not consider them grounded. In fact, the agreement is very complex, its provisions cannot always be straightforwardly interpreted, so it is necessary to look for compromises and solutions,” Ulyanov told Russian state-run news agency, Sputnik.

An official with the State Department told the Jouranl its new measures are meant to “induce Russia to come back into compliance with the treaty.”

Meanwhile, Russia has claimed other nations have also placed limits on Russian observation flights, including Canada and the United States.

“We have serious claims that a number of participating states are interfering with observation flights,” retired Maj. Gen. Alexander Peresypkin, a member of Russia’s Vienna delegation, told the Journal.

He said claims of Russian non-compliance are exaggerated to balance out those restrictions and that the United States is “resourceful in reducing access to its airspace.”