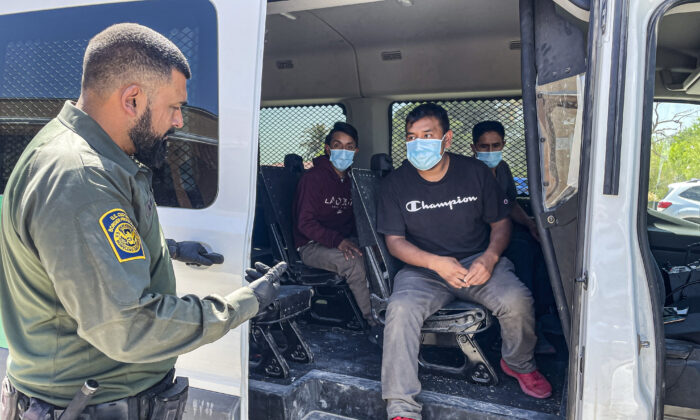 US to Release Up to 600,000 Illegal Immigrants in Coming Months

A U.S. immigration enforcement agency plans to release up to 600,000 illegal immigrants as it deals with a projected surge in migration, an official revealed in a court filing.

Because of the forecasts and the recently announced decision to end Title 42, “ICE must shift its focus and prepare to manage its resources for a population of up to 600,000 by the end of the fiscal year,” Dougherty added.

Jessica Vaughan, director of policy studies for the Center for Immigration Studies, said that means ICE will be releasing the immigrants, which include unaccompanied minors and family units, by then.

“I was very surprised at that number that they seem to be just casually talking about releasing,” Vaughan told The Epoch Times. “There doesn’t seem to be any sense of concern for what the effects of the new arrivals are in the communities where they’re going to be settling. There’s no concern about the cost. There’s no concern about their ability to identify these people or their ability to keep track of them and make sure that they show up for their immigration proceedings, and that they know where they are in case they have to remove them.”

ICE takes control of some immigrants who are processed by Border Patrol, another agency inside the Department of Homeland Security.

The Biden administration is preparing for a flood of illegal immigrants once Title 42, a pandemic-era policy that enables quick expulsions, ends in May.

The court document, entered in an ongoing case over how illegal immigrant children are treated, gives a concrete number for what one agency expects to encounter in the coming months.

ICE can legally hold immigrants until they have court hearings but increasingly chooses to release them in what’s called the Alternative to Detention program, which involves giving the immigrants a notice to appear in court and letting them free inside the United States.

Like many immigration agencies, ICE has seen its backlog of cases grow, exceeding 3.6 million in Fiscal Year 2021.

An ICE Office of Inspector General report found that “ICE is almost certainly not deporting all the noncitizens who could be deported and will likely not be able to keep up with growing numbers of deportable noncitizens.” The agency has failed to locate over 400,000 convicted criminal illegal aliens.

Many immigrants encountered after they illegally enter America claim asylum, but most of those claims are ultimately rejected.

The projected increase will strain ICE, according to Vaughan.

“The number is so huge it’s hard to understand how they could possibly manage the flow without being so overwhelmed that it causes them to almost have to give up on actually identifying people and making any effort to keep track of them,” she said.

Ideally, she added, the immigrants should be kept in custody before being removed. Once would-be migrants learn that the laws will be enforced, many will not come, she said.

“As a matter of policy, U.S. Immigration and Customs Enforcement does not comment on ongoing or pending litigation. However, lack of comment should not be construed as agreement with, or stipulation to, any allegations,” an ICE spokesperson told The Epoch Times in an email.

The Biden administration has presided over an unprecedented amount of illegal immigration, setting records for apprehensions at the U.S.–Mexico border for both Fiscal Year 2021 and 2021.

In March alone, there were 221,303 encounters—a jump of 33 percent from February.