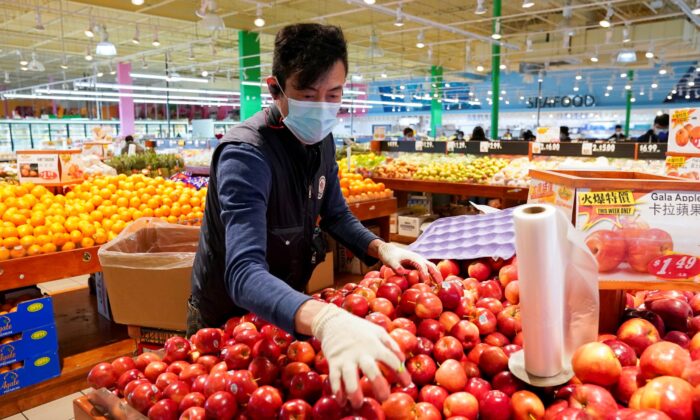 Wearing a mask and gloves, a worker re-stocks apples in an Asian grocery store in Falls Church, Va., on April 3, 2020. (Kevin Lamarque/Reuters)
US News

US to Issue COVID-19 Rule for Healthcare Workers on Thursday

The U.S. workplace regulator will publish a rule on Thursday requiring healthcare employers to take steps to protect workers from COVID-19, Secretary of Labor Marty Walsh told a congressional panel on Wednesday.

The Occupational Safety and Health Administration (OSHA) will also release non-binding guidance on how other businesses can protect workers, Walsh told a hearing of the House of Representatives Education and Labor Committee.

During the Trump administration, OSHA rejected calls by unions, Democrats, and worker advocates for a rule that would apply to most employers. Instead, the agency issued a series of non-binding guidance documents tailored to different industries.

Walsh did not reveal other details of the rule. He said the guidance would apply to the treatment of workers who have not received COVID-19 vaccines.

“I think the answer should be, let’s let people go back to work in a normal fashion,” Walberg said during the hearing, held via Zoom.

“I like the signs of where we’re headed,” Walsh responded. “However, people are still dying and are still getting infected.”