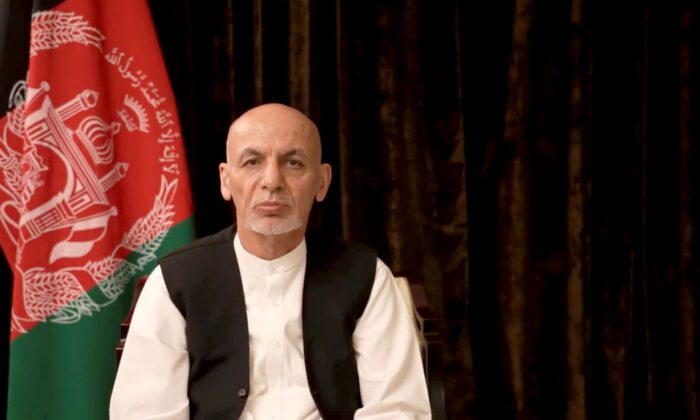 Afghan President Ashraf Ghani makes an address about the latest developments in the country from exile in United Arab Emirates, on Aug. 18, 2021. (Ashraf Ghani via Facebook/Screenshot via Reuters)
International

The office overseeing reconstruction in Afghanistan is investigating whether former Afghan President Ashraf Ghani has taken millions of dollars intended for the people of the war-torn country.

Ghani, in the wake of the American and NATO forces’ withdrawal and a rapid Taliban takeover, abandoned the besieged city of Kabul on Aug. 15 and has been taking refuge in the United Arab Emirates ever since. Afghan Ambassador to Tajikistan Mohammad Zahir Aghbar claimed that Ghani left with duffle bags stuffed with cash totaling $169 million, but did not provide evidence for the claim.

Ghani called the accusation “baseless,” saying that he left Afghanistan with nothing but the clothes on his back.

John Sopko, the special inspector general for Afghanistan reconstruction (SIGAR), said Wednesday before the House Committee on Foreign Affairs that his office is examining the allegations at the request of another congressional committee.

“We haven’t proven that yet. We’re looking into that. Actually, the Oversight and Government Reform Committee has asked us to look into that,” he said.

Sopko’s testimony comes after a group of House Republicans sent a letter to Attorney General Merrick Garland and Secretary of State Antony Blinken, demanding answers to whether Ghani has indeed fled Kabul with bags of cash.

“Reports indicate that President Ghani in fact had so much looted money with him when he fled Afghanistan that not all of it would fit in his helicopter, and that he was forced to leave money lying on the tarmac,” the lawmakers wrote in the Aug. 24 letter, citing a Reuters report based on Russian sources.

“It is unclear how President Ghani obtained such a large sum of cash, but the amount and nature of his flight from Afghanistan raises the specter that he illegally and corruptly embezzled these funds from U.S. assistance intended for the Afghan people’s welfare and defense,” the Republicans argued, noting that the Ghani administration was mostly financed by the Americans. “If Ghani was embezzling funds from the government of Afghanistan, he was likely embezzling U.S. taxpayer funds.”

One of the least stable and developed countries in the world, Afghanistan was highly dependent on U.S. aid money. According to SIGAR, some $145 billion has been appropriated for Afghanistan since 2002 in an effort to train Afghan military, build infrastructure, and uproot corruption. In a quarterly report published in October 2020 (pdf), the office said it had reviewed the usage of $63 billion in U.S. funds, and concluded that $19 billion, or one-third of it, was “lost to waste, fraud, and abuse.”