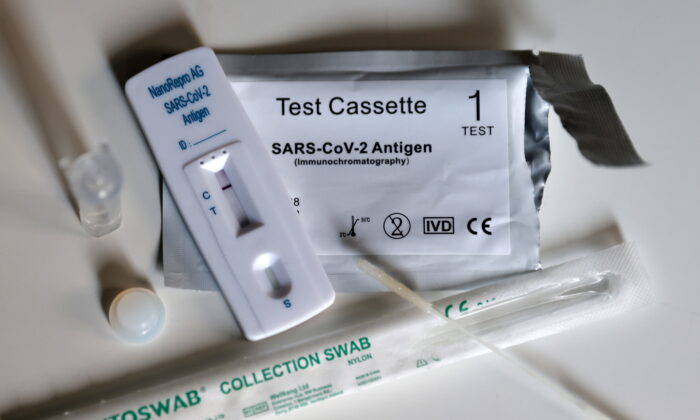 A used coronavirus disease (COVID-19) rapid test with negative result is pictured during pandemic lockdown, in Berlin, Germany, on March 31, 2021. (Fabrizio Bensch/Reuters)
US

US to Invest Another $1 Billion in Rapid COVID-19 Tests

The U.S. government is committing to purchase an additional 180 million rapid COVID-19 tests for $1 billion, adding to the $2 billion test buying plan it announced in September, a top U.S. health official said on Wednesday.

The combined purchases will help quadruple the United States’ test output by December to around 200 million tests per month, Jeff Zients, the White House coronavirus response coordinator, said during a press call.

“We’ll continue to pull every lever to expand manufacturing production of tests which will have the impact of driving down the cost per test and making sure that tests are widely available and convenient,” Zients said.

The government will also double the number of pharmacies it partners with to provide free COVID-19 tests to 20,000 pharmacies, Zients added.

Surging demand for COVID-19 tests from U.S. employers has exacerbated a nationwide shortage of rapid tests in recent weeks and is driving up costs for state and local testing programs.

The White House in September said it plans to mandate weekly testing for unvaccinated staff at businesses with more than 100 employees.

The U.S. government agreed in September to purchase $2 billion worth of rapid COVID-19 tests from Abbott Laboratories and Celltrion Inc to ship to nursing homes and other high-risk populations as part of President Joe Biden’s plans to increase vaccinations and tests.

The U.S. government also has agreements to purchase tests from other manufacturers, including Quidel Corp., OraSure Technologies, and Intrivo.

Earlier this week, U.S. regulators authorized another rapid test from Acon Technologies that can be taken at home. Zients said the test will retail for around $10 per test.

The average number of daily U.S. coronavirus cases dropped by 12% over the last seven days to nearly 98,000, and hospitalizations dropped 14% to 7,400, said U.S. Centers for Disease Control and Prevention (CDC) Director Dr. Rochelle Walensky said during the briefing.