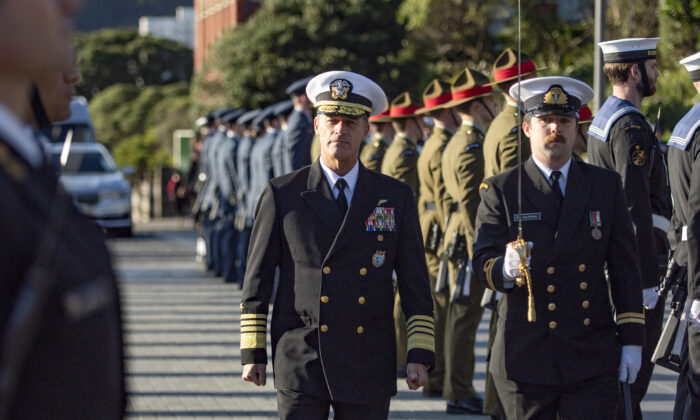 The commander of the U.S. Indo-Pacific Command, U.S. Admiral John Aquilino, made an official visit to New Zealand on Aug. 1 to expand the partnership between the two countries as tensions in the region grow due to Beijing’s aggression.

“Our partnership runs very deep. We are doing many things together to continue to ensure peace and prosperity for both of our nations and for all the nations in the region,” Aquilino told reporters.

The visit to Wellington followed an earlier trip to neighbouring Sydney, where he engaged with 27 senior military leaders at the Chief of Defence Conference to discuss ways to continue the safeguarding of peace and stability in the region.

Aquilino said talks with senior New Zealand government and military leaders would similarly revolve around “understanding each other’s positions” and identifying new areas where both countries could work together and expand the partnership.

He added that Australia and New Zealand both played “critically important” leadership roles in the South Pacific region.

“The United States has been a Pacific nation our entire life. We will continue to operate in the Pacific, no matter what else you might hear,” Aquilino said. “We will operate in the areas that international law allows to preserve the peace, prosperity, and expansive relationships in the Pacific.”

Despite the small size of New Zealand’s military, Aquilino said the United States welcomed all operations with all partners, regardless of size.

“So the one thing you will never hear out of me is big or small. This is a partnership, and all nations deliver those things that they can deliver,” he said.

It follows the highly controversial military pact signed between Beijing and the Solomon Islands, sparking concerns about a potential Chinese military base on the doorsteps of Australia and New Zealand.

Recent reports have also revealed that a Chinese state-owned firm was investigating the purchase of a deep water port and World War II-era airstrip in the Solomon Islands.

The firm, under the direct control of Beijing, is eyeing the island of Kolombangara—the site of extensive fighting between the Allies and Imperial Japan during World War II.

It is currently owned by Taiwanese and Australian private shareholders and the Solomon Islands government.

These developments have spurred the United States to shift greater attention to the region, with U.S. Vice President Kamala Harris pledging to support Pacific leaders under the Pacific Islands strategic framework on July 12.

Among the commitments announced by Harris were efforts to establish new U.S. embassies in Kiribati and Tonga, increased funding for numerous economic and environmental programs, and an announcement that the United States would appoint its first-ever envoy to the Pacific Islands Forum.

Meanwhile, Sogavare has continued to deny that the Chinese regime will establish a military base in the Solomons.

Daniel Y. Teng and Andrew Thornebrooke contributed to this report.