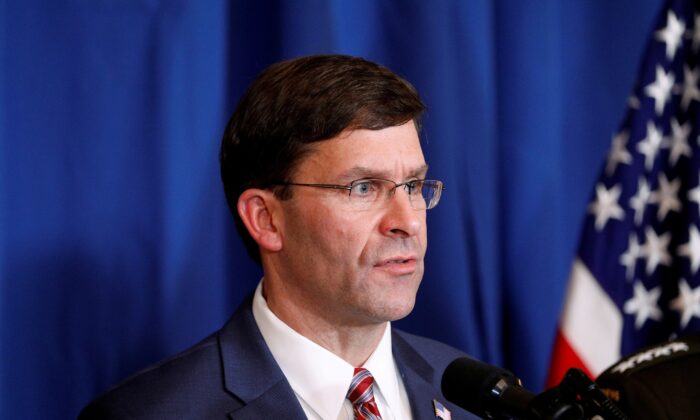 Secretary of Defense Mark Esper speaks about airstrikes by the U.S. military in Iraq and Syria, at the Mar-a-Lago resort in Palm Beach, Florida on Dec. 29, 2019. (Tom Brenner/Reuters)
US News

The Department of Defense (DOD) announced on Jan. 23 that it will be putting in place more comprehensive vetting measures for international military students and increasing patrols at the Pensacola Naval Air Station in Florida, following a tragic shooting at the naval base last month that left three people dead.

Defense Secretary Mark Esper said during a press conference at NAS-Pensacola on Thursday that the Pentagon would be improving vetting procedures for international students “to prevent such acts from happening again.”

Pentagon chief Esper said new measures would include monitoring the social media of international military students before and after their arrival to the United States.

“The vetting changes will be far more comprehensive,” he told reporters inside an aircraft hangar at the base. “It’ll look at every aspect of their background, it’ll look at social media, and it will also involve continuous monitoring once they’re here in the United States.”

“We’ve taken any number of measures like that to ensure that we have a much higher degree of confidence with regard to each of the students.”

The announcement came just days after the DOD said in a statement that it would restrict students’ possession and use of firearms, implement control measures for limiting their access to military installations and U.S. government facilities, and impose standards for training on detecting and reporting insider threats in response to the Dec. 6 attack.

The shooting focused public attention on the presence of international students in American military training programs and exposed shortcomings in the screening of cadets.

In addition to the further vetting of international students, Esper added that the Pentagon might increase roving and stationary patrols to provide a “greater sense of confidence.”

The Defense Secretary said he hoped students and families could feel confident that there will be “security that is in place and can be even more responsive than the—the team that was there on the site.”

The Justice Department last week announced that the fatal attack was an act of terrorism.

Attorney General William Barr said the gunman, who was a flight student at Pensacola, was motivated by jihadist ideology and had posted multiple social media messages containing anti-American, anti-Israel, and jihadi messages up to two hours before the attack. One of those messages, posted on Sept. 11 last year, stated, “The countdown has begun.”

The Justice Department added that 21 Saudi trainees were being sent home. The 21 had jihadist or anti-American sentiments on social media pages or had “contact with child pornography,” including in internet chat rooms, officials said. None has been accused of having had advance knowledge of the shooting or helped the gunman carry it out.

The United States has long had a robust training program for the Saudi military, providing assistance at home and in the kingdom. There are currently about 850 Saudis participating in U.S. military training programs, according to the Pentagon.