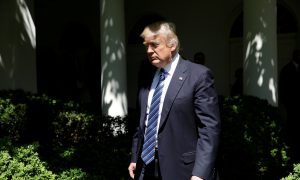 Despite opposition from Turkey, President Donald Trump has approved supplying arms to Kurdish YPG fighters to support an operation to retake the Syrian city of Raqqa from the ISIS terrorist group, U.S. officials said on Tuesday.

Ankara views the Kurdish YPG militia fighting within a larger U.S.-backed coalition as the Syrian extension of the Kurdish PKK militant group, which has fought an insurgency in Turkey’s southeast since 1984.

There was no immediate reaction from Turkey, which allows the U.S.-led coalition battling ISIS access to a strategic Turkish air base.

But the Pentagon immediately sought to stress it saw arming the Kurdish forces “as necessary to ensure a clear victory” in Raqqa, ISIS’s de facto capital in Syria and a hub for the group’s attack plots against the West.

“We are keenly aware of the security concerns of our coalition partner Turkey,” Pentagon spokeswoman Dana White said in a statement as she traveled in Lithuania with Trump’s defense secretary, Jim Mattis.

“We want to reassure the people and government of Turkey that the U.S. is committed to preventing additional security risks and protecting our NATO ally.”

The United States has long supplied arms to the Arab components of the so-called Syrian Democratic Forces, which include YPG fighters. White said Washington would still prioritize supplying those Arab fighters within the SDF.

Mattis, speaking before the announcement, sounded upbeat about working through tensions with Ankara when speaking to reporters in Denmark after talks with coalition officials, including from Turkey.

“Our intent is to work with the Turks, alongside one another, to take Raqqa down, and we’re going to sort it out and we’ll figure out how we’re going to do it,” Mattis told a news conference.

Ankara had long argued that Washington should switch support for the planned assault on Raqqa from the Kurdish YPG militia to Syrian rebels Turkey has trained and led against ISIS for the past year.

But the U.S. administration was skeptical that the Turkish-backed force was large enough or sufficiently trained.

White appeared to allude to that conclusion when she said: “The SDF, partnered with enabling support from U.S. and coalition forces, are the only force on the ground that can successfully seize Raqqa in the near future.”

One U.S. official, who spoke on condition of anonymity, did not disclose how soon arms would start being delivered to the Kurdish fighters.

“The Raqqa campaign is running in parallel with the international coalition against terrorism. It’s natural that they would provide weapons” to the SDF and the armed groups fighting as part of it,” Muslim said.