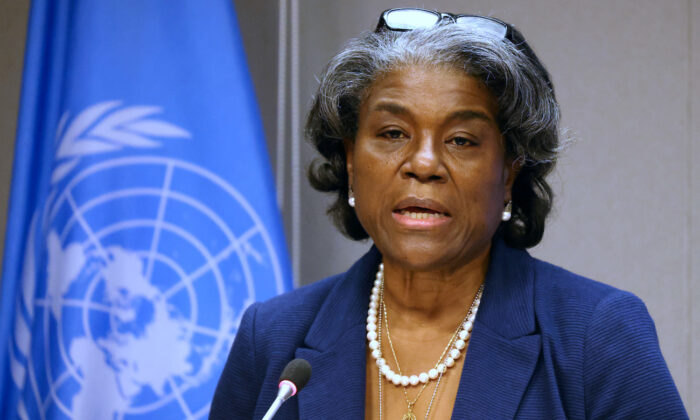 Linda Thomas-Greenfield, the U.S. ambassador to the United Nations, at a briefing in New York City on March 1, 2021. (Spencer Platt/Getty Images)
By Mimi Nguyen Ly

The United States is set to issue sanctions directed at Russia following Russian President Vladimir Putin’s announcement that Russia will regard two areas in Ukraine’s Donbas region as independent, and his subsequent signing of a decree that authorized Russian troops to be sent into the area for so-called “peacekeeping operations.”

“Tomorrow, the United States will impose sanctions on Russia for this clear violation of international law and Ukraine sovereignty and territorial integrity,” she told reporters, adding, “We can, will, and must stand united in our calls for Russia to withdraw its forces, return to the diplomatic table, and work toward peace.”

At the emergency meeting, Thomas-Greenfield dismissed Putin’s actions as “nonsense.”

“[Putin] has since announced that he will place Russian troops in these regions. He calls them peacekeepers,” Thomas-Greenfield said. “This is nonsense. We know what they really are.”

The White House had earlier announced sanctions in response to Putin’s actions aimed at the two separatist regions, to prohibit Americans from investing and conducting business in the areas.

“The Departments of State and Treasury will have additional details shortly. We will also soon announce additional measures related to today’s blatant violation of Russia’s international commitments,” Press secretary Jen Psaki said in the statement.

Putin justified his decision in a pre-recorded speech blaming NATO for the current situation and calling the U.S.-led alliance an existential threat to Russia. The Russian president described today’s Ukraine as a modern construct that is inextricably linked to Russia. He charged that Ukraine had inherited Russia’s historic lands and after the Soviet collapse was used by the West to contain Russia.

Western nations have expressed concern that Russia will order an invasion of Ukraine, and estimate that more than 150,000 Russian troops are gathered along Ukraine’s border. Russia has denied it has any plans to invade Ukraine, accusing western allies of expanding NATO in a threat to Moscow’s security as Ukraine seeks to be granted membership.

The United States has predicted that Russia has already decided to invade, but the White House announced early on Monday that Biden had agree to meet with Putin on the condition that the Kremlin refrains from mounting an attack on Ukraine. Meanwhile, U.S. State Department personnel were evacuated from Ukraine overnight to Poland. They will “regularly return” to Ukraine to continue their diplomatic work and emergency consular services. The State Department again urged any American citizens in Ukraine to leave immediately.

In 2014, Russian troops seized and annexed Ukraine’s Crimean Peninsula. Since then, skirmished between Russian and Ukrainian forces have been reported in Ukraine’s Donbas region. The ongoing war has killed over 14,000 people since 2014. Ukraine and the West have accused Russia of supporting the separatists with arms and troops, but Moscow has denied that, saying that the Russians who fought were volunteers.