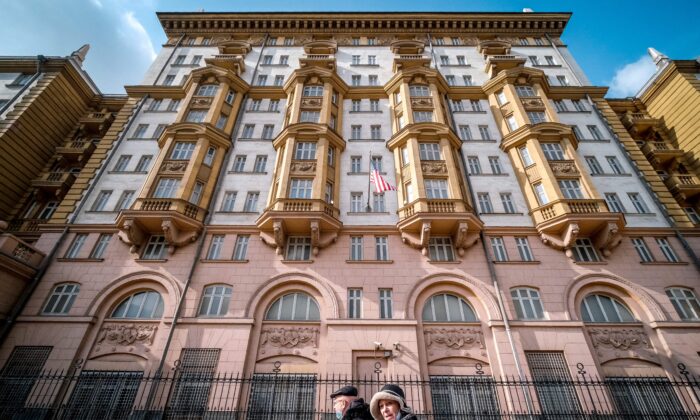 The U.S. State Department on Feb. 27 said American citizens should consider leaving Russia immediately as airlines cancel flights from the country amid the Russia–Ukraine war.

“An increasing number of airlines are cancelling flights into and out of Russia, and numerous countries have closed their airspace to Russian airlines,” the agency said in a security alert.

The European Union (EU) on Sunday shut down EU airspace for all Russian-owned, Russian-registered, or Russian-controlled aircraft.

“These aircraft will no more be able to land in, take off or overfly the territory of the EU,” the union’s president, Ursula von der Leyen, said in a statement.

She said the move was a show of support for Ukraine against “the aggressor” in the war, Russia.

The Russian airline Aeroflot soon after said it wouldn’t fly to any European airports because of how various countries’ airspace was blocked.

The United States had already urged Americans to leave Ukraine and closed its embassy in Kyiv about two weeks before Russian troops on Feb. 24 entered Ukraine. Americans still in Ukraine were urged to complete an online form so the State Department could communicate with them, and that border crossings into neighboring countries were open.

On Sunday, the department said there were long waits at many of the crossings into Poland and Moldova, recommending people use crossings into Hungary, Romania, and Slovakia.

“The U.S. Embassy urges U.S citizens in Ukraine to depart now using privately available transportation options if it is safe to do so. Careful consideration should be made to routes and the risks of travel because Ukraine’s roads are in many cases crowded, exposed to combat operations, and infrastructure such as bridges in some locations has been destroyed. Sheltering in place may remain the best option for some,” the department said.

Americans fleeing Ukraine should be prepared to wait for hours at crossings, taking with them extra clothes, food, and water, and hard copies of important documents such as birth certificates.

American officials said Monday they had closed the U.S. Embassy in Minsk, Belarus because Belarus has been letting Russian forces go through the country to approach Kyiv from the north.

The State Department additionally said non-emergency employees and family members at the U.S. Embassy in Moscow were being allowed to leave.