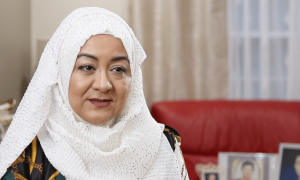 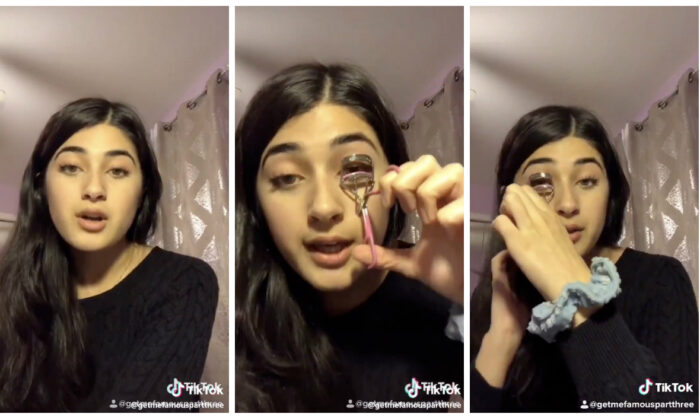 U.S. teen Feroza Aziz informs viewers about the Chinese Communist Party's detention of at least 1 million Uyghurs in Xinjiang, China, in a video on TikTok, which was later censored. (Courtesy of Feroza Aziz/Twitter)
US News

The U.S. teenager whose TikTok account was suspended after she posted videos calling out the Chinese Communist Party (CCP) for its oppression of Uyghurs and other ethnic minorities in Xinjiang has accused the Beijing-based company behind the video-sharing app of “covering up” the truth.

In a now-viral three-part video cleverly disguised as a tutorial on how to curl eyelashes, Feroza Aziz, a 17-year-old high school junior in New Jersey, tells her viewers to “spread awareness” of the human rights abuses in China’s troubled northwestern region, where it is estimated at least one million Uyghurs are being held in the region’s network of mass internment camps.

Here is a trick to getting longer lashes! #tiktok #muslim #muslimmemes #islam pic.twitter.com/r0JR0HrXbm

Shortly after, the Muslim American teenager said she had been blocked from TikTok for a month, sharing a screen grab on Twitter of the message that stated that it was due to “multiple violations of our [TikTok’s] Community Guidelines.”

While the social network, owned by Beijing’s ByteDance, has since issued a public statement apologizing for suspending Feroza’s TikTok account, but it has continued to deny the suspension had anything to do with “China-related content.”

China is scared of the truth spreading. Let’s keep scaring them and spread the truth. Save the Muslims #chineseholocaust #muslim pic.twitter.com/GbreNFWBEc

Instead, the app said in a statement that the teenager’s account was moderated for posting a satirical video on a separate, previously deleted account “that included the image of Osama bin Laden.” A spokesman for TikTok later added that the video was removed for 50 minutes due to a “human moderation error.”

In a phone interview with The Epoch Times, Feroza said she believes TikTok’s statement is “suspicious” and “doesn’t add up at all,” particularly, she added, because a video she posted last month on a separate account highlighting the humanitarian crisis in Xinjiang was removed from the app as well.

She added that although her account has since been reinstated, she believes this only happened due to the media coverage which ensued following her ban.

“I thought that the apology was very suspicious and that it was them covering up what was happening,” Feroza said. “For them to say that my account was taken down because of a satirical video I created on a previous account which were both deleted—I was very doubtful.”

“I think they gave me my account back because they cracked under pressure and they knew the world was finding out that the truth was finally coming out,” she said.

UPDATE: my tik tok is back up…very suspicious

The 17-year-old, who describes herself as a human rights activist, also told The Epoch Times she finds it extremely odd that TikTok has not privately apologized to her since she emailed them on the morning of Nov. 26.

“I think it is very, very strange.”

CCP officials say the mass detentions among the Uyghur population, the majority of whom practice Islam, are part of measures to crack down on terrorism, religious extremism, and separatism in the country. The CCP has referred to potential “extremist threats” in order to justify its strict surveillance and crackdown on Uyghurs and other ethnic minority groups in the Xinjiang region.

Firsthand accounts described to The Epoch Times have also revealed attempts by authorities to strip Uyghur detainees of their culture and language—as the party did to the Chinese and Tibetans during the cultural revolution—forcing them to denounce their faith and pledge loyalty to the CCP and its leader. If detainees fail to follow orders, they may be subject to several forms of torture as punishment.

News of Feroza’s account suspension comes as TikTok—which has a global audience of more than 700 million—faces intense scrutiny. The video app previously came under fire after moderation guidelines leaked earlier this year stated that videos containing reference to the Tiananmen Square massacre in 1989, Tibetan independence, and Falun Gong, among other criteria, must be censored.

While the guidelines made no specific reference to Xinjiang itself, it said videos containing “highly controversial topics, such as separatism, religion sects conflicts, conflicts between ethnic groups, for instance exaggerating the Islamic sects conflicts” must be moderated, the Guardian reported.

Meanwhile, a newly published report from the Australian Strategic Policy Institute (ASPI) titled “Mapping more of China’s tech giants: AI and surveillance,” found that ByteDance actively “collaborates with public security bureaus across China, including in Xinjiang” to disseminate the CCP’s propaganda on the region.

The tech company also signed a “strategic cooperation agreement” in April with the Ministry of Public Security’s Press and Publicity Bureau, to “promote the ‘influence and credibility’ of police departments nationwide” within its Chinese version of TikTok—Douyin.

“Under the agreement, all levels and divisions of police units from the Ministry of Public Security to county-level traffic police would have their own Douyin account to disseminate propaganda,” the ASPI report states.

“The meteoric growth of TikTok now puts the CCP in a position where it can attempt to do the same on a largely non-Chinese speaking platform—with the help of an advanced AI-powered algorithm.”

Despite receiving hoards of hateful comments from social media accounts appearing to originate from mainland China, Feroza told The Epoch Times she plans to continue posting videos on her social media platforms to spread awareness about various issues.

“I know that what I’m preaching is the truth. I know that millions of people around the world are so happy that I got to spread awareness about the issue,” she said. “I’m going to continue to help Uyghurs, and any humanitarian crisis that’s going on in the world. I’ll spread my voice about Colombia, Afghanistan, Venezuela, Somalia—anywhere that needs help.”

Love these young people using their platforms in clever ways to raise awareness for the millions of Muslims who are put in camps in China and forgotten by the world ✊🏽pic.twitter.com/yMbVefuRnZ

Speaking of several videos filmed on TikTok in a similar style, which have cropped up since she posted her three-part series, Feroza said she believes this signifies that the app could be used as a platform for activism.

The secret to big triceps pic.twitter.com/qrotRNbt0F

Feroza also urged that people take notice of issues which may not be receiving the media attention they deserve.

“Just because it’s hard to believe doesn’t mean it’s not true or not happening,” she added.

Despite the emergence of classified documents and intensifying pressure from international communities condemning Beijing, the CCP continues to deny any mistreatment of Uyghurs or others in Xinjiang.