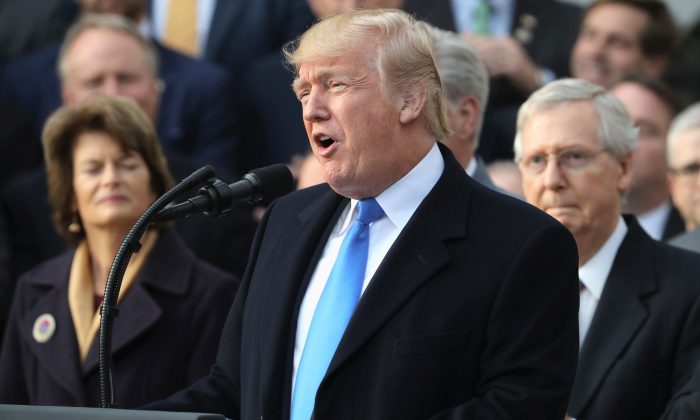 U.S. President Donald Trump, flanked by Republican lawmakers, celebrates Congress passing the Tax Cuts and Jobs Act on the South Lawn of the White House on Dec. 20, 2017 in Washington, D.C. The biggest threat to the Canadian economy comes from companies already operating in both countries that may move more operations to the United States. (Chip Somodevilla/Getty Images)
Companies

The US$1.5 trillion in tax cuts represents the biggest achievement for Donald Trump’s presidency, and while it renders the Canadian business climate relatively less attractive, the bigger challenges for Canada are domestic, according to business experts.

But the Canadian business environment already has its hands full with higher minimum wages and controversial changes to its own tax system applied to income sprinkling and passive investments. More payroll tax hikes are on the horizon and looming in the backdrop is the threat of NAFTA being scrapped.

So as far as the Trump tax cuts being a watershed moment, business expert Mark Satov of Satov Consultants says it is and it isn’t.

“Anytime we talk about Canadian competitiveness in the last six months, I don’t think you can isolate it to one of those issues,” Satov said in a phone interview. “You have to talk about the compound effects of all of those issues.”

In its January 2017 monetary policy report, the Bank of Canada said U.S. tax cuts would be a double-edged sword for the Canadian economy. The positive would be greater demand for Canadian exports due to a faster-growing U.S. economy; however, Canada would be less competitive as a business environment due to having relatively higher taxes.

The Canadian government just announced it would be cutting the small business tax rate to 9 percent in 2019. While the all-in rate is the lowest in the G7, it only applies to the first $500,000 of income. This benefit, understandably, is minor when compared with taxation of income sprinkling—albeit watered down—and passive investments, not to mention the U.S. broad-based tax cuts. Also, employment insurance rates have gone up this year and the Canada Pension Plan premium will be going up for the next five years.

These factors are more relevant for Canadian businesses than the big U.S. tax cuts, says Corinne Pohlmann, senior vice-president of national affairs and partnerships at the Canadian Federation of Independent Business (CFIB).

“It’s a confluence of changes,” Pohlmann said in a phone interview. “All these other things that are happening are far more negative when it comes to the cost of doing business in Canada.”

Multinationals will see immediate benefits from the U.S. tax cuts and may try to increase those benefits.

“For corporations that operate in United States and Canada, I think that’s where we can see the quickest change,” Satov said. Such companies can relocate production and show profits in the jurisdiction where it is most favourable. “That’s where we have to worry the most.”

Pohlmann sees things the same way. For Canadian companies that decide to build a U.S. subsidiary, “that’s what takes jobs away from Canadians, … that’s the immediate biggest threat,” she said.

Satov says that, in the short term, Canadian businesses may have to consider dropping prices to stay competitive with their American counterparts. Then in the medium term, automation should be considered to help mitigate the impact of rising labour costs and to improve productivity.

“In the long term, I’m going to reconsider where I should be setting up businesses,” Satov said, saying how businesses will react.

Capital, such as a new factory, takes a longer time to react. Business investment also needs a predictable business environment. Akin to the stock market, it doesn’t like uncertainty, says Satov.

“Both of those things prefer predictability to favourability,” Satov said.

While Trump is business-friendly, he’s unpredictable, adds Satov, which can be a mitigating factor to the U.S. tax advantage. Businesses remain cautiously optimistic about the long-term stability of the Trump administration’s policies. There’s always a threat that the next administration could reverse some of them.

The U.S. tax cuts are effectively a salvo to fiscal policy around the world, and Canada, already without a plan to balance its books, is no different.

“As America’s largest trading partner, Canada’s economy is about to get heavily side-swiped,” wrote Jack Mintz, President’s Fellow at the University of Calgary’s School of Public Policy, in a Financial Post editorial. Mintz, an expert in tax policy, said that if Canadian policy-makers don’t respond, the private sector will send investment, jobs, and profits south of the border.

Canadian firms want to remain competitive and do business on a level playing field. The CFIB is advocating for ways to lower payroll taxes, which especially hurt smaller, labour-intensive companies.

“Income taxes are certainly important. So are other forms of taxation,” Pohlmann said. “We need to look at the whole taxation package in Canada.”