US Tariffs Are ‘Only Real Leverage’ to Get Beijing to Comply with Trade Deal, Expert Says 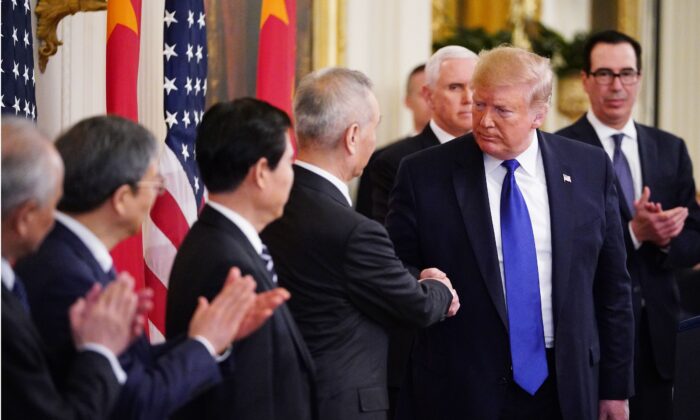 US President Donald Trump (R) and China's Vice Premier Liu He, the country's top trade negotiator, shake hands before signing a trade agreement between the US and China during a ceremony in the East Room of the White House in Washington, DC on Jan. 15, 2020. (Mandel Ngan/AFP via Getty Images)
By Eva Fu

The signing of the much-anticipated “phase one” trade deal on Jan. 15 is a big win for the United States and “will be a real shot in the arm for the U.S. economy,” said economist Stephen Moore.

Meanwhile, critics question whether the Chinese regime will follow through on promises in the deal, including to buy more U.S. goods and protect American intellectual property.

Moore, the chief economist at the Heritage Foundation and a former economic advisor for Trump’s 2016 presidential campaign, told The Epoch Times’ affiliate NTD that he was surprised to see the president get “as many concessions from Beijing as he did in this deal.”

“At the very least, this is a truce, and at the very least, it means there will not be an escalation of tariffs in 2020,” Moore said. “So that’s very good news for investors, for businesses, and for workers,” he added.

Although the Beijing government has signed the document, “it’s another [issue] for them to follow through with what they are agreeing to,” Moore said.

He added that tariffs are the United States’ “only real leverage” to get the Chinese to comply with the agreement.

“If you [China] abide by this deal, and if relations … improve,” then the U.S. administration could consider lowering the tariffs. “But China’s going to have to show over the next 12 to 18 months that they’re actually living by the tenets of the deal,” he continued.

A number of U.S. officials also welcomed the agreement as a much-needed step for addressing the regime’s long-standing trade abuses.

“This agreement finally levels the playing field for U.S. agriculture and will be a bonanza for America’s farmers, ranchers, and producers,” U.S. Agriculture Secretary Sonny Perdue said in a statement, adding that they “look forward to exporting to Chinese customers hungry for American products.”

Sen. Michael McCaul (R-Texas), the lead Republican of the House Foreign Affairs Committee, thanked the president for his “head-on approach” to the negotiations, and expressed hope that the agreement could be the first step toward “leveling the playing field.”

Sen. Chuck Schumer (D-N.Y.), however, called the trade deal “an extreme disappointment.” He said that the United States “concedes our leverage” for “vague, unenforceable promises” that China “never intends to fulfill.”

“I fear the [Chinese leader] Xi [Jinping] is laughing at us behind our backs for having gained so much at our expense,” he said.

Sen. Rick Scott (R-Fla.), who has been critical of the Chinese regime, also warned that “Communist China never lives up to the bargain,” adding that the U.S.-China relations “is also about human rights.”

China has pledged to purchase an additional $78 billion of U.S. manufactured products, along with $54 billion of energy purchases, $32 billion in farm products, and $38 billion in services over the next two years.

China analyst Gordan Chang expressed doubts on whether Beijing will make good on the promises, especially on manufacturing purchases.

The African swine fever and the armyworm pest, both of which are “devastating to Chinese agriculture,” will force China to import farm goods to make up its shortfall.

“I’m not so sure that China is going to actually adhere to that promise,” he told The Epoch Times.

Additionally, Chang said he has “no confidence at all” on China’s promises on intellectual property, which he saw as “one of the biggest omissions” in the phase one agreement.

“It is the way that he can accomplish this Made in China 2025 goals—his goal to dominate technology across the board. He needs to steal it in order to accomplish his aims,” Chang added, referring to the industrial policy that aims to transform China into a high-tech manufacturing powerhouse by the year 2025.

Chang also noted China’s new cybersecurity law that officially took effect on Jan. 1. The law compels companies to hand over encryption keys, which are crucial to protect the confidentiality of information transmitted and stored on networks, making networks transparent to the Chinese communist regime.

“I don’t think they should have signed to phase one agreement without sorting out the cybersecurity rules because they’re so broad,” Chang said.

“They take all the information of foreign companies on their China servers, which means there’s no point in the intellectual property protections in the phase one agreement—they’re almost completely made irrelevant by the new cybersecurity rules,” he said.

Moore believed that the trade issue will be an ongoing battle.

“This is a titanic struggle between the two largest economies in the world, both vying for economic supremacy,” he said. “There will be many, many, many rounds and this is the first step.”