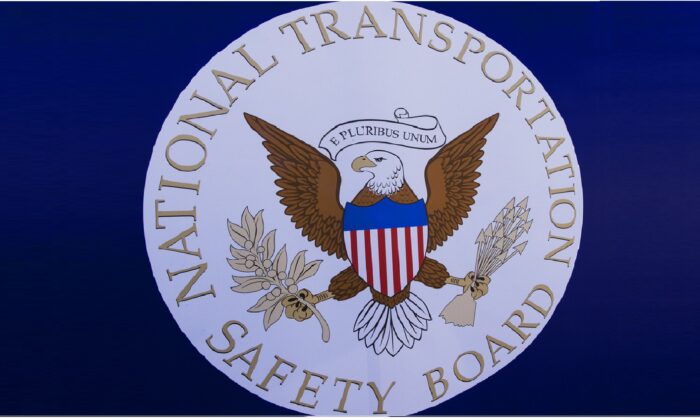 The NTSB logo during a safety event for children at Trailside Middle School, in Ashburn, Va., on Aug. 25, 2015. (Paul J. Richards/AFP via Getty Images)
Space

WASHINGTON—With more private companies launching people into space, the U.S. government said Friday that the National Transportation Safety Board (NTSB) will take the lead in investigating future commercial space accidents where a person is killed or seriously injured.

The NTSB will be the lead investigative agency in those fatal or injury incidents regardless of whether the person was on board the commercial space launch or reentry vehicle, according to an agreement the NTSB signed with the Federal Aviation Administration (FAA).

The NTSB will also take the lead if there is damage to property not associated with the commercial space launch or reentry activities or the launch site from debris that could reasonably be expected to cause death or serious injury.

The FAA will be the lead investigative agency for all other commercial space mishaps.

The last agreement between the two agencies was signed 22 years ago, the NTSB said.

The NTSB is currently reviewing public comments on its November 2021 proposal codifying investigative procedures for commercial space accidents and incidents.

Under the law, NTSB, an independent federal agency, investigates all fatal airplane crashes and other serious transportation accidents.

NTSB chair Jennifer Homendy told Reuters in an interview it was important to establish lines of command for an investigation before there is a major incident.

“We have to be ready … You don’t want to wait until something tragic occurs,” Homendy said. “If we are going by history, it’s not a matter if, it’s a matter of when.”

The Federal Communications Commission this week proposed rules to address the growing challenge of orbital debris, noting “defunct satellites, discarded rocket cores, and other debris now fill the space environment creating challenges for future missions.” As of 2021, there were more than 4,800 satellites in orbit.