US, Taliban Sign Deal Aimed at Ending War in Afghanistan 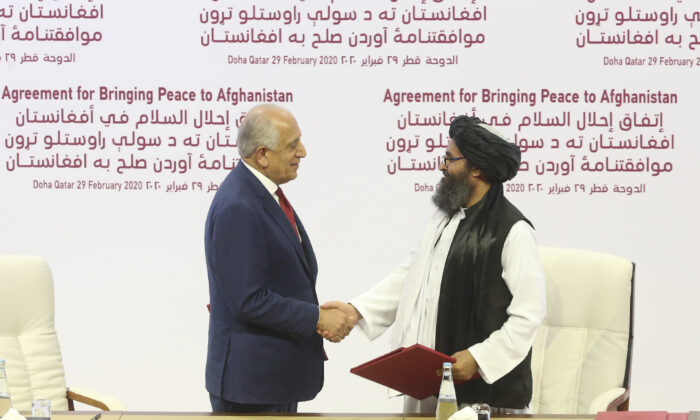 The United States signed a peace agreement (pdf) with Taliban militants on Feb. 29, aimed at bringing an end to 18 years of bloodshed in Afghanistan and allowing U.S. troops to return home from America’s longest war.

As part of the deal, the United States would withdraw 4,400 of 13,000 troops in the next three to four months, with the remainder exiting in 14 months. In exchange, the Taliban committed to preventing terrorists from using Afghanistan as a staging ground for attacks.

The United States invaded Afghanistan in response to the Sept. 11, 2001, terrorist attacks. Within months, U.S. troops defeated the Taliban and forced the al-Qaeda terrorist group to flee to Pakistan. But the war continued as the United States sought to stabilize the country before withdrawing its forces. The Taliban currently hold sway over half the country.

The war has claimed the lives of 2,440 American soldiers and cost taxpayers $750 billion.

The Taliban terrorist group harbored the al-Qaeda terrorists who plotted and executed the hijackings of four airliners that crashed into the World Trade Center towers in New York, the Pentagon in Washington, and a field in Pennsylvania, killing 2,977 people.

Pompeo told reporters after the ceremony that the United States is “realistic” about the peace agreement and is “seizing the best opportunity for peace in a generation.” He said Washington won’t “squander” what its soldiers “have won through blood, sweat, and tears” and will do whatever is necessary for its security if the Taliban don’t live up to their side of the deal.

Dozens of Taliban members had earlier held a small victory march in Qatar, in which they waved the terrorist group’s black-and-white flags, according to a video shared on Taliban websites.

President Donald Trump ran for office on a promise to get the United States out of its “endless wars” in the Middle East.

Last September, on short notice, he called off what was to be a signing ceremony with the Taliban at Camp David after a series of new Taliban attacks. But he has since been supportive of the talks led by his special envoy Khalilzad.

Under the agreement, 5,000 Taliban are to be released from Afghan-run jails.

It isn’t clear what will become of minute gains made in women’s rights since the toppling of the Taliban, which had repressed women and girls under a strict brand of sharia (Islamic law).

The United States has a contingent of 8,000 troops serving under the NATO banner and a separate force of 5,000 troops deployed to carry out counterterrorism missions and provide air and ground support to Afghan forces.

The total NATO deployment consists of 16,500 soldiers; troops from Germany and Britain make up the next largest contingents with 1,300 and 1,100 troops, respectively.

In all, 38 NATO countries are contributing to training and supporting Afghan forces.

Since the start of negotiations with the Taliban, the United States has stepped up its air assaults on the Taliban as well as the ISIS terrorist group. In 2019, the U.S. Air Force dropped more bombs on Afghanistan than in any year since 2013.

Seven days ago, the Taliban began a seven-day “reduction of violence” period, a prerequisite to the signing of the peace deal.

NATO Secretary-General Jens Stoltenberg was in Kabul on Feb. 29 for a separate signing ceremony with Afghan President Ashraf Ghani and U.S. Defense Secretary Mark Esper. That signing was intended to show continuing NATO and U.S. support for Afghanistan.

“The road to peace will be long and hard and there will be setbacks, and there is a risk always for spoilers,” Stoltenberg said. “But the thing is, we are committed, the Afghan people are committed to peace, and we will continue to provide support.”