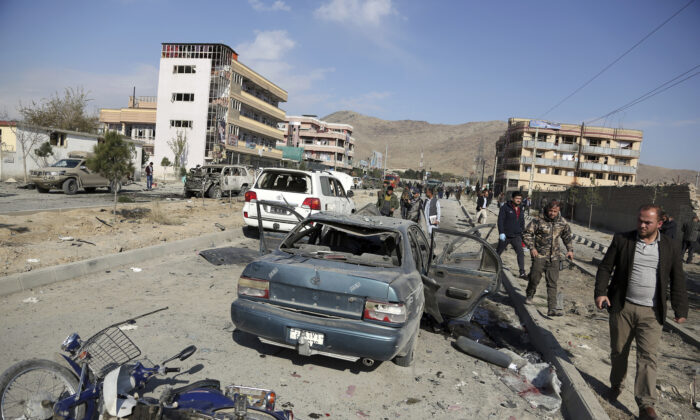 US, Taliban Announce Peace Deal to Be Signed Next Week

The United States and the Taliban reached an understanding in recent weeks on a reduction of violence in Afghanistan, the State Department said Friday, and plan to sign a peace agreement on Feb. 29.

U.S. negotiators and Taliban representatives have been meeting in Doha, Qatar, to try to hammer out a deal that would see the Taliban cut down on military action, paving the way for the United States to withdraw troops from Afghanistan.

An understanding has been reached between the parties “on a significant and nationwide reduction in violence across Afghanistan,” Secretary of State Mike Pompeo said in a statement.

If the understanding is successfully implemented, then the United States expects an agreement to be signed on Feb. 29, followed by negotiations between the Taliban and the Afghan government.

“The only way to achieve a sustainable peace in Afghanistan is for Afghans to come together and agree on the way forward,” Pompeo stated. “Challenges remain, but the progress made in Doha provides hope and represents a real opportunity. The United States calls on all Afghans to seize this moment.”

Pompeo’s announcement came after Sirajuddin Haqqani, a senior Taliban leader, attempted to portray the group as a victim of circumstances.

“We did not choose our war with the foreign coalition led by the United States. We were forced to defend ourselves. The withdrawal of foreign forces has been our first and foremost demand,” he wrote in a New York Times op-ed.

“That we today stand at the threshold of a peace agreement with the United States is no small milestone.”

One of the major challenges, Haqqani said, would be reaching an agreement with the Afghan government.

One of President Donald Trump’s campaign promises was the reduction of troops in international arenas. U.S. troops have been in Afghanistan since 2001.

The United States, led by White House envoy Zalmay Khalilzad, started negotiating with the Taliban last year. Secretary of Defense Mark Esper said on Feb. 13 that the parties negotiated a proposal for a weeklong reduction of violence.

Esper, speaking after a meeting with North Atlantic Treaty Organization allies, said he was consulting with allies about the proposal.

“We’ve said that the best—if not only—solution in Afghanistan is a political agreement,” Esper said. Speaking at the Munich Security Conference later in the week, Esper called the solution “promising,” adding: “It’s my view as well that we have to give peace a chance, that the best if not the only way forward in Afghanistan is through a political agreement and that means taking some risk.”

“That means enabling our diplomats and that means working together with our partners and allies on the ground to affect such a thing,” he said.

Pompeo earlier this month said an agreement on reducing violence would require “demonstrable evidence” from the Taliban. He said that negotiations came close to an agreement before but failed because the Taliban were unable to demonstrate seriousness.

“We’re working on a peace and reconciliation plan, putting the commas in the right place, getting the sentences right. We got close once before to having an agreement: a piece of paper that we mutually executed and the Taliban were unable to demonstrate either their will or capacity or both to deliver on a reduction in violence,” he told reporters in Uzbekistan.

“So, what we are demanding now is demonstrable evidence of their will and capacity to reduce violence, to take down the threat, so the inter-Afghan talks … will have a less violent context.”