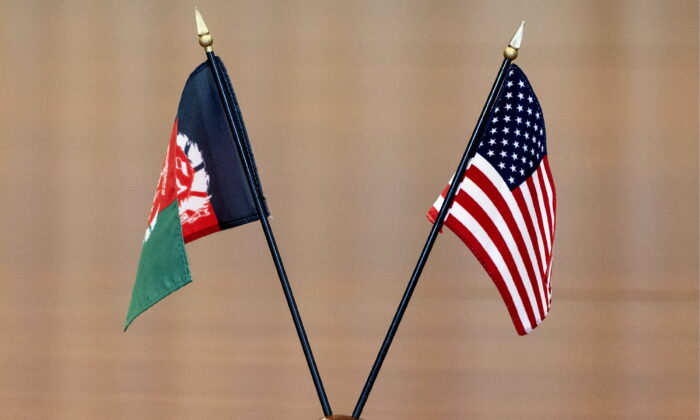 The flags of Afghanistan and the United States on the table before a meeting at the Pentagon in Washington on June 25, 2021. (Alex Brandon/AP Photo)
US News

The State Department said that it had assumed “sole responsibility” for the security and maintenance of the diplomatic missions effective on Monday and would bar anyone from entering them without its permission until further notice.

The move came after the department determined that the embassy and consulates had “formally ceased conducting diplomatic and consular activities in the United States” at noon on May 16.

The United States does not recognize the new Taliban government in Afghanistan, which took power last year after the withdrawal of American and allied troops, and does not have formal diplomatic relations with the country.

“Until further notice, the Department of State’s Office of Foreign Missions has assumed sole responsibility for ensuring the protection and preservation of the property of the referenced missions, including but not limited to all real and tangible property, furnishings, archives, and financial assets of the Afghan Embassy or its consular posts in the United States,” the department said in a notice to be published Wednesday in the Federal Register.

The missions were identified as the Afghan embassy in Washington, and consular posts in Little Neck, New York, and Beverly Hills, California.

A department official said the United States had taken control of the facilities in an agreement with diplomats from the former Afghan government who faced “severe financial constraints that made continued operations unsustainable.” The official said the step did not signal any change in U.S. policy toward Afghanistan and that it did not affect the Afghan mission to the United Nations.

The department noted Afghanistan had not requested a third country to serve as a “protecting power” for its facilities or interests in the U.S. Since Washington closed its embassy in Kabul, Qatar has served as the U.S. protecting power in Afghanistan.