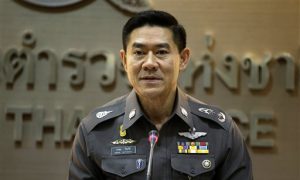 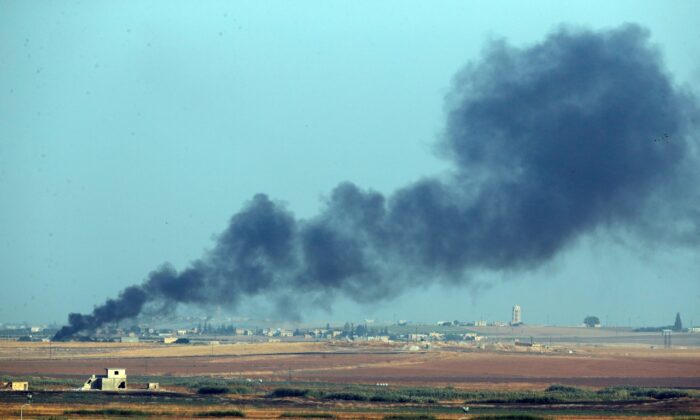 Smoke billows from a fire inside Syria during bombardment by Turkish forces , on Oct. 9, 2019. Turkey launched a military operation Wednesday against Kurdish fighters in northeastern Syria after U.S. forces pulled back from the area, with a series of airstrikes hitting a town on Syria's northern border. (Lefteris Pitarakis/AP Photo)
Middle East

US Relocates 2 British Alleged Terrorists Tied To Beheadings In Syria

U.S. officials say two captive British alleged terrorists believed to be part of a group under ISIS that beheaded hostages have been taken into American custody and moved out of Syria.

President Donald Trump said on Oct. 9 that the United States had transferred some ISIS prisoners detained in Syria to an unknown location where they can be watched, amid fears they could escape custody as Turkish troops invade northeastern Syria.

Officials say they took El Shafee Elsheikh and Alexanda Amon Kotey out of Syria to an undisclosed location.

The two men and other British jihadis who made up the alleged ISIS cell that beheaded prisoners were nicknamed “The Beatles” by surviving captives because of their English accents. The cell beheaded seven American, British and Japanese journalists and aid workers and a group of Syrian soldiers in 2014 and 2015, boasting of the butchery in videos released to the world.

Turkish troops invaded northern Syria on Wednesday to push back Kurdish fighters it views as terrorists. The Kurdish forces had been backed by the United States and they had captured the last of ISIS-controlled territory in Syria in March.

The Kurds also hold thousands of ISIS fighters in detention centers. There was concern the detainees could gain freedom if the Kurdish forces left their guard posts to battle Turkish forces.

Trump had said that some “really bad” detained ISIS fighters have been moved, but he didn’t disclose at the time how many where moved or where or when they were relocated.