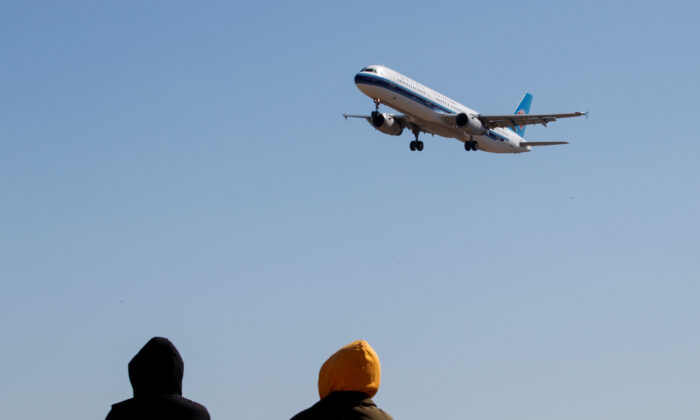 The United States will suspend 26 China-bound flights in September in response to the Chinese Communist Party’s (CCP) decision to suspend some U.S. carrier flights because of COVID-19 restrictions.

The U.S. Department of Transportation (USDOT) announced the move late on Aug. 25 and cited China’s recent cancellation of 26 flights by American Airlines, Delta Air Lines, and United Airlines as the reason for the move.

The CCP revised its policies for flights entering China on Aug. 7. Under the new rules, if 4 percent or more of the passengers of a flight to China test positive for COVID-19, the flight must be suspended. If 8 percent or more test positive, then Chinese authorities suspend two flights.

USDOT told Reuters that the United States repeatedly raised objections with the CCP and stated that the rules place “undue culpability on carriers” since travelers can test negative before boarding their flight only to later test positive upon arrival in China.

Liu Pengyu, a spokesperson for the Chinese Embassy in Washington, told Reuters that the USDOT retaliation was “extremely irresponsible.” He also said China’s COVID-19 measures were fair and transparent.

The Biden administration was at loggerheads with the CCP over the latter’s arbitrary COVID-19 pandemic regulations for flights.

In January, USDOT suspended 44 China-bound flights from the United States by the same four Chinese carriers in response to the CCP’s decision to suspend 44 flights by U.S. carriers.

There are only about 20 flights per week between the United States and China, down from more than 100 per week before the pandemic. The loss of 25 flights in a single month is taxing on already underperforming airlines.