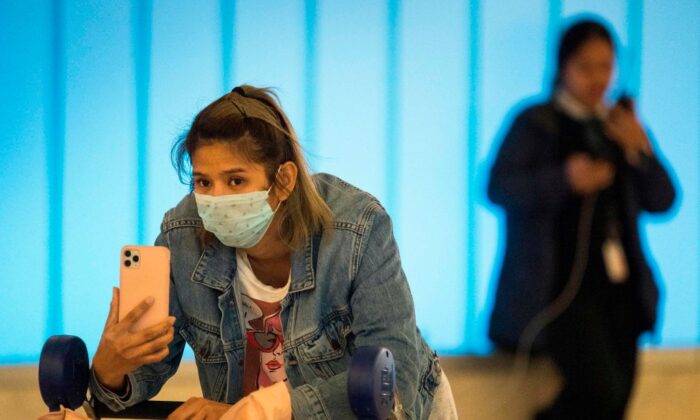 Passengers wear masks to protect against the spread of the Coronavirus as they arrive at the Los Angeles International Airport, California, on Jan. 22, 2020. (Mark Ralston/AFP via Getty Images)
By Janita Kan

The surgeon general of the United States has urged the public to “stop buying masks,” warning that it could lead to a shortage for healthcare workers and effectively put them and communities at risk.

U.S. Surgeon General Jerome M. Adams made his plea in several Twitter posts on Saturday as Americans rush to purchase disposable face masks and other protective equipment. The demand for masks is leading to shortages that have caused price surges on online shopping platforms Amazon and eBay.

“Seriously people- STOP BUYING MASKS!” Adams wrote in his post, adding that masks are “not effective” in preventing the public from catching the virus and a lack of such protective equipment could put healthcare workers at risk.

Adams added that the best way the public can protect themselves from contracting the virus is to maintain strong preventive actions like staying at home when sick and washing hands with soap and water.

The surgeon general’s remarks echo officials from the World Health Organization (WHO) who also expressed concerns over the lack of protective equipment around the world.

“Our primary concern here is to ensure that our front-line health workers are protected and that they have the equipment they need to do their jobs,” Dr. Michael J. Ryan, executive director of the WHO health emergency program, said during a briefing on Friday. “So when we talk about protective equipment and masks, we’re talking about that very specific specialized material that’s needed. And that is under significant pressure.”

Ryan said that masks can stop the wearer from spreading the disease to someone else, but there are limits to preventing a person from being infected.

“Not having a mask does not necessarily put you at any increased [risk] of contracting this disease,” he said, adding that preventive measures are the best way to stop the spread of the virus.

Meanwhile, U.S. officials said on Feb. 29 that the risk of the American public catching the virus remains low.

President Donald Trump and Vice President Mike Pence also shared a similar assessment of the risk of the virus to Americans. Trump said that the United States is prepared and has stockpiled 43 million masks and other supplies.

Earlier on Feb. 29, Washington state health officials confirmed that one person has died from the virus, becoming the first patient to die from the disease in the United States.

On Feb. 28, the U.S. pharmacy chain CVS warned there could be a temporary shortage of hand sanitizer and fitted N95 face masks due to a spike in demand amid the outbreak. Walgreens has also reported high demand for masks and protective items.