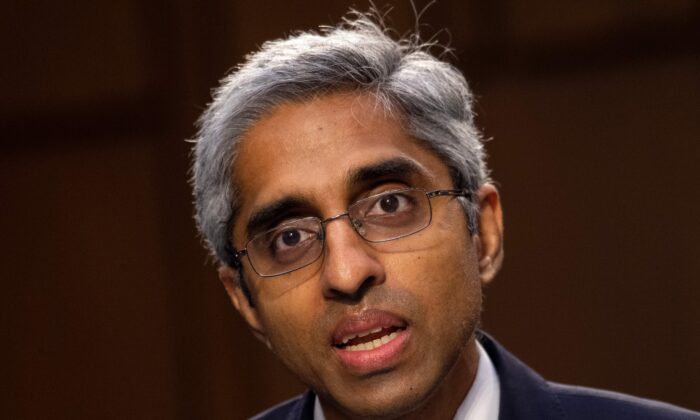 Vivek Murthy testifies before being confirmed as Surgeon General before senators on Capitol Hill in Washington on Feb. 25, 2021. (Caroline Brehman/Pool/AFP via Getty Images)
Executive Branch

US Surgeon General: Biden Admin Will ‘Monitor’ Whether Vaccine Exemptions Being Used Properly

U.S. Surgeon General Dr. Vivek Murthy said that the Biden administration will look into reports of what he described are workers improperly finding loopholes in COVID-19 vaccine exemptions.

Last week, President Joe Biden announced a mandate that any company with 100 or more employees needs to force their workers to either get vaccinated or submit to regular COVID-19 testing. One workaround is to either claim religious exemption or exemption on medical grounds.

In a comment to CNN on Sunday, Murthy said that the White House will “monitor” the exemptions.

“Unfortunately, as a country, we have experience in dealing with exemptions, but we’ve got to be vigilant there and make sure that people are using them, you know, in the spirit that they’re intended and not abusing them or asking for exemptions when they don’t apply,” Murthy said. “That’s an area that we continue to monitor in the days and weeks ahead.”

Biden’s announcement on the mandate, which may affect around 80 million private-sector employees, drew significant criticism from Republican governors and some business leaders. It’s likely that numerous lawsuits will be filed after the order is issued.

Several Republican governors and lawmakers said they would take action, including filing lawsuits, against the Biden order.

“I’ve been talking to my attorney general, he is coordinating with the other attorneys general across the country who share similar views about the overreach,” Nebraska Gov. Pete Ricketts told Fox News on Sunday. “As we see what these rules are, we will be able to know exactly how we will be able to challenge them in court. I’m also talking with my colleagues around the country as well the other governors who feel the way I do, and we’ll be working on other strategies.”

Murthy in the same interview said President Joe Biden will announce more COVID-19 measures this week ahead of the United Nations General Assembly meets in New York on Tuesday. He didn’t elaborate on what those might be.

“There will be more actions that we continue to work on, especially in the global front,” he said Sunday.

Amid the widespread criticism against the vaccine mandate for private-sector workers, Murthy claimed that some business groups support them.

“We know that these kinds of requirements actually work to improve our vaccination rates,” he told ABC News Sunday. “Tyson Foods, for example, which put in a vaccine requirement, recently saw that its vaccination rate went from 45 percent to more than 70 percent in a very short period of time and they’re not even at their deadline yet.”