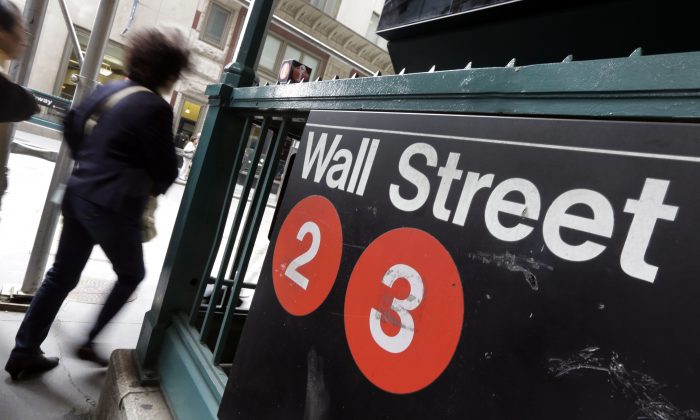 Chevron, Denbury Resources and other oil producers surged, leading eight of the 10 industries in the Standard & Poor’s 500 index higher.

In other trading, the Russian ruble strengthened against the dollar slightly after the country’s central bank hiked its key interest rate in an effort to shore up the currency. The ruble, under pressure from falling oil prices and Western sanctions over Moscow’s conflict with Ukraine, had fallen as much as 20 percent before recovering.

Benchmark U.S. crude rose 2 cents to close at $55.93 a barrel in New York. Brent crude, a benchmark for international oils used by many U.S. refineries, fell $1.20 to close at $59.86 in London. Oil has fallen by nearly half since June as demand wanes and supply surges.

“Lower oil prices certainly are a net positive for U.S. consumer spending,” he said. “But there’s a contagion risk out there that investors have an eye on. Namely, what does it do to shale gas players, and what does it mean to the banks that lend to them?”

RUBLE ROUT: Russia’s central bank hiked interest rates to 17 percent from 10.5 percent late Monday. The ruble has lost half its value against the dollar since January. The ruble traded at 67 per dollar late Tuesday afternoon Eastern time. That’s an improvement from earlier in the day, when it hit 78 to the dollar.

BIG DOG: In a turbulent world, the stability of the U.S. economy and its stock market will appear more attractive to investors, said John Manley, chief equity strategist at Wells Fargo Fund Management.

“Yes, I do worry about Russia, yes I do worry about Venezuela, and you can’t really have oil come down more than 45 percent without somebody having a problem, somewhere,” Manley said. “But there’s an old saying on Wall Street, ‘In a dog-eat-dog market, get yourself a big dog,’ and the U.S. is the ultimate big dog when it comes to this sort of thing.”

FALLOUT: Falling oil prices have hammered markets in the Persian Gulf. Dubai’s main market and Abu Dhabi’s closed at their lowest points of the year on Tuesday with losses of 7 percent. Saudi Arabia’s stock market fell 7.3 percent. Many are concerned that the drop in the price of oil will lead to less government spending and political unrest.

A DEAL: Talisman Energy soared 48 percent following news that Repsol, a Spanish oil and gas producer, plans to buy the Canadian company for $8.3 billion. The merger would create one of the world’s largest privately owned oil and gas companies, Repsol said. Canadian courts and shareholders still have to sign off on the deal. Talisman’s stock gained $2.44 to $7.57.

ROUGH PATCH: December, usually one of the market’s best months, hasn’t been living up to its reputation. Since reaching a record high on Dec. 5, the S&P 500 has fallen into a slump, losing ground on five of the past six trading days. Energy companies have been hit the hardest, a result of the ongoing slump in crude. The S&P 500 has lost 3 percent so far this month.

UNPLUGGED: Troubled electronics retailer RadioShack dropped 13 percent after the company replaced its chief financial officer, just days after repeating a warning that the company might have to seek bankruptcy protection. RadioShack fell four cents to 38 cents.

MORTGAGE MESS: Ocwen Financial slumped 6 percent after the monitor overseeing a national mortgage settlement said that the company, one of the biggest U.S. servicers of home loans, has produced unreliable information about its business practices. The stock fell $1.31 to $20.94.

CHINA FACTORIES: In other trading on Tuesday, shares in Shanghai made gains after a HSBC report on manufacturing showed a contraction for the first time in seven months. Although the numbers underscored the persistent weakness in China, the world’s second-biggest economy, they also raised hopes for more stimulus from China’s central bank following a surprise interest rate cut last month.

From The Associated Press. AP Markets Writer Steve Rothwell contributed to this report.