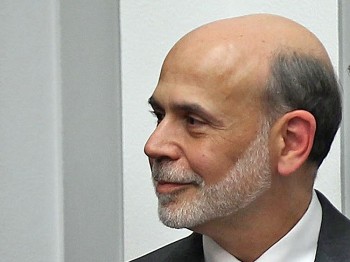 US Stocks Get Lift from Bernanke Remarks

The Dow Jones Industrial Average was up by triple digits earlier on Wednesday, after Federal Reserve Bank Chairman Ben Bernanke suggested that the central bank would consider another round of monetary easing, dubbed Quantitative Easing 3 (QE3), to aid the U.S. economic recovery.

Less than an hour into the trading day Wednesday morning, stocks shot up after the Fed released Bernanke’s remarks on how the central bank plans to stimulate the U.S. economy. “The possibility remains that the recent weakness may prove more persistent than expected and that deflationary risks might re-emerge, implying additional policy support,” Bernanke told the House Financial Services Committee on Wednesday.

Quantitative Easing 2 (QE2), which includes asset purchases, was completed near the end of June, and Bernanke suggested that a third round could be in the works, as the economy isn’t growing as quickly as the president and many economists had hoped.

The news, coupled with continued weakness in the European debt market, served to bid up the price of gold futures, which settled at a nominal all-time high Wednesday. Gold for August deliveries gained $23.20 per ounce, or 1.5 percent, to $1,585.50 on the Comex, which is part of the New York Mercantile Exchange.

The U.S. dollar weakened against a basket of currencies on Wednesday after news of possible additional monetary easing by the Fed.