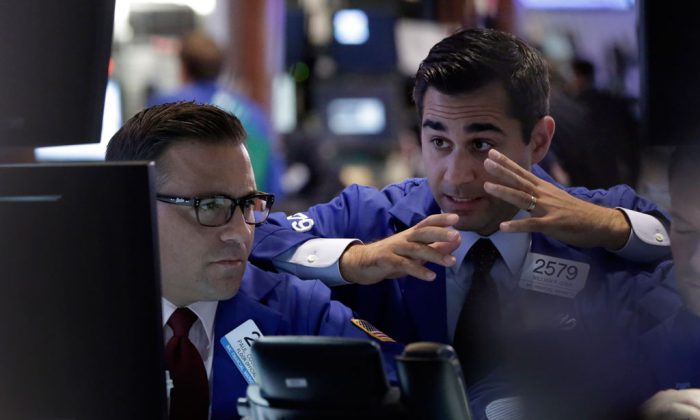 Specialists Paul Cosentino (L) and William Geer work at a post on the floor of the New York Stock Exchange, Thursday, Oct. 16, 2014. US stocks drifted between small gains and losses in late afternoon trading Thursday, struggling to remain in positive territory after a steep slide early in the day. (AP Photo/Richard Drew)
Business & Markets

US Stocks Flip Between Gains and Losses in Afternoon Trading

NEW YORK—U.S. stocks wavered between small gains and losses in afternoon trading Thursday amid generally positive corporate earnings results. DreamWorks soared on a report that Hasbro is trying to buy the movie company. Energy stocks tumbled as the price of oil fell to a four-year low.

LOW ENERGY: Energy stocks slumped 2 percent, the most of the 10 industry sectors in the S&P 500 as a slide in the price of benchmark U.S. oil entered its fifth month. Oil slumped again Thursday, losing nearly 4 percent to hit another four-year low.

EARNINGS: Wal-Mart Stores jumped $3.59 to $82.79 after reporting earnings and revenue that were higher than financial analysts had expected. The 4.5 percent gain was the biggest in the Dow Jones index. Media conglomerate Viacom, which owns the Paramount studio, MTV and VH1, rose $2.35, or 3.4 percent, to $71.60 after its results topped forecasts.

TOY TIE-UP: Shares of DreamWorks Animation surged $2.43, or 11 percent, to $24.80 on a New York Times report that the toy maker Hasbro was in “advanced talks” to buy the movie company. Both Hasbro and DreamWorks, known for movie franchises “Shrek” and “Madagascar,” said they do not comment on rumors or speculation.

THE QUOTE: “There’s been a lot of momentum (up) in recent weeks, and a pause is probably a healthy development,” said Jim Russell, a portfolio manager at Bahl & Gaynor, an investment firm. “We can see a scenario in which the market takes a time out, and reconsolidates for few days.”

BURYING THE HATCHET WITH HACHETTE: Amazon rose 1.3 percent following news that it had resolved a bitter, long-running dispute with the book publisher Hachette. Amazon rose $3.91 to $315.42.

OIL SLIDE: The price of crude oil fell sharply again Thursday on indications that OPEC is unlikely to trim output when it meets later this month. Benchmark U.S. crude fell $2.97 to close at $74.21 a barrel on the New York Mercantile Exchange. Brent crude, a benchmark for international oils used by many U.S. refineries, fell $2.46 to close at $77.92 a barrel, also a 4-year low, on the ICE Futures exchange in London.

BONDS: U.S. government bond prices were little changed. The yield on the 10-year Treasury note slip to 2.34 percent from 2.36 percent on Wednesday.