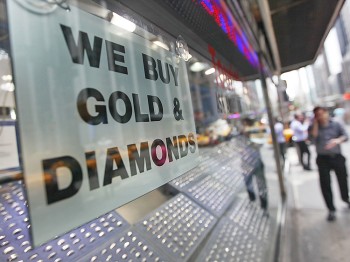 President Barack Obama’s self-imposed deadline to reach a new debt deal is in five days, and no progress has been made as of Monday. However, Republicans and Democrats in both chambers are looking at alternatives to avoid a U.S. default on its debt.

Ratings agency Moody’s Investors Service has already said that the firm is reviewing the U.S.’s Aaa rating for a possible downgrade even if a deal is reached prior to Aug. 2, when most economists believe a default would occur if the debt ceiling isn’t raised.

Bank shares fell by more than most other industries as investors bet that the brunt of the pain of sovereign debt defaults would be felt at financial services firms that hold such securities. Shares of Bank of America Corp. dropped 2.8 percent to $9.70 and shares of Citigroup Inc. likewise lost 1.7 percent.

The overall worries were a boon to commodities, especially gold and silver, which serve as haven investments for investors fearful of risk. Gold futures for August delivery rose to a record high Monday, exceeding $1,600 per ounce. Silver futures also rose by $1.18 to settle at $40.25 per ounce.

The CBOE Volatility Index (VIX) rose by 7.8 percent Monday, underscoring general market uncertainty. The VIX, which rises when there is expected market volatility, is generally known as the Wall Street “fear gauge” by analysts.