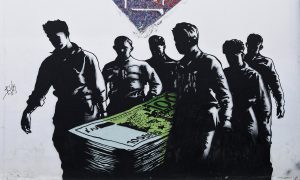 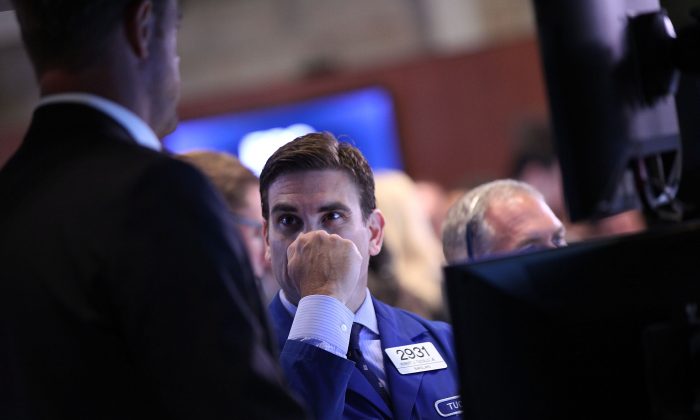 US Stocks Fall After Greek ‘No’ Vote; European Markets Sink

NEW YORK—Stocks in the U.S. fell in afternoon trading Monday following sharper drops in Europe and Asia as Greeks voted to reject the spending cuts and tax increases demanded by its creditors for additional loans.

U.S. government bond prices rose as investors sought safe places to park money. A rout in the stocks of oil drillers and other energy companies also fed the selling. The price of oil plunged 7.7 percent.

Investors in the U.S. seemed to turn more optimistic earlier in the day, but then resumed their selling. Meeting in Paris with her French counterpart, German Chancellor Angela Merkel stressed the importance of Greece taking “responsibility” for reforming its economy. Both she and French President Francois Hollande said the door was open to more negotiations.

In Sunday’s referendum on creditor proposals, 61 percent of Greeks voted “no,” a much higher proportion than anticipated.

The market declines were not as bad as many had feared, something analysts credited to the resignation of the Greek finance minister, which might help bailout talks resume.

The U.S. market is coming off its sharpest weekly decline in three months.

In Europe, Germany’s DAX fell 1.5 percent while the CAC-40 in France fell 2 percent. The FTSE 100 index of leading British shares was 0.8 percent lower.

Many in the markets fear that the decision has pushed Greece one step closer to leaving the euro. A so-called “Grexit” from the euro is considered one of the biggest risks facing the global economy.

Sung Won Sohn, an economist at California State University, said that he expects a Greek exit to push up the value of the dollar as investors scramble for safety, making U.S. exports more expensive.

“Our economic growth will be slower, and in Europe, whose economy is the most important for the U.S., growth will slow,” he said.

Others are more optimistic.

Russ Koesterich, chief strategist at giant money manager BlackRock, wrote in note to clients that he doesn’t think the Greece crisis poses a “longer-term” threat to the global economy or financial markets.

With Greek banks still shuttered and the European Central Bank under pressure to stop its emergency liquidity measures, Greece may not have long to secure a deal with creditors. A meeting of the eurozone’s 19 leaders has been called for Tuesday.

Some hopes for progress in the talks grew Monday after Greek Finance Minister Yanis Varoufakis quit. His replacement may help unblock discussions with peers in the eurozone. Finance ministers also meet on Tuesday.

Over months of negotiations, Varoufakis’ relations with his peers in the eurozone had deteriorated significantly.

“The fact that Varoufakis has resigned hints that the Greek government may at least be offering an olive branch given his reputation for using aggressive terms such as ‘water-boarding’ to describe the creditors’ actions,” said Jane Foley, a senior currency analyst at Rabobank International.

The eurozone has taken steps after years of trouble with Greece to limit damage from a default and euro exit. Banks in Europe no longer hold many Greek government bonds and the European Central Bank has pledged to pump liquidity into its financial system should fear spread through Europe.

Still, investors are on edge.

When the Greek government announced June 29 plans to hold a referendum and the closure of the country’s banks, markets plunged around the world. In the U.S., the S&P 500 fell 2.1 percent, its biggest drop since the start of the year.

China bucked the trend. China’s benchmark index, the Shanghai Composite climbed 2.4 percent after regulators and the securities industry intervened to prop up prices that had been falling in recent weeks.