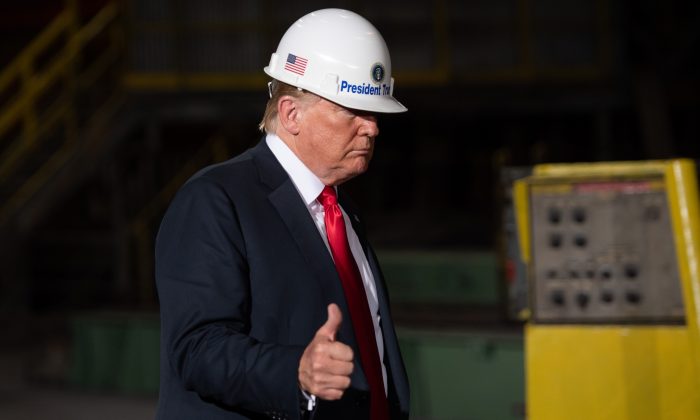 BIRMINGHAM, Ala.—United States Steel Corporation will restart construction on an idled manufacturing facility in Alabama, and it gave some of the credit to President Donald Trump’s trade policies in an announcement on Feb. 11.

Trump’s “strong trade actions” are partly responsible for the resumption of work on an advanced plant near Birmingham, the Pittsburgh-based company said in a statement. The administration’s tariffs have raised prices on imported steel and aluminum.

Work will resume immediately, the company said, and the facility will have an annual capacity of 1.6 million tons.

United States Steel said it also will update other equipment and plans to spend about $215 million, adding about 150 full-time workers. The furnace is expected to begin producing steel in late 2020.

The 16,000-member United Steelworkers praised the decision to resume work, which followed an agreement with the union reached last fall.

“This decision paves the way for a solid future in continuing to make steel in Alabama and the Birmingham region,” Leo W. Gerard, the president of the international union, said in a statement.

United States Steel shut down its decades-old blast furnace at Fairfield Works in 2015, idling about 1,100 employees, and said it would replace the operation with an electric furnace.

“United States Steel Corp. said it plans to add 1.6 million tons of steelmaking capacity next year by resuming the construction of a new furnace in Alabama as tariffs on foreign metal raise profits on domestic steel.”https://t.co/rtTmvjF5q3

The company then blamed conditions in the steel, oil and gas industries as it suspended work in Dec. 2015 on an electric arc furnace at its mill in Fairfield, located just west of Birmingham. The project stalled until the announcement on Monday.

United States Steel and other large United States steelmakers have benefited since the Trump administration began imposing 25 percent tariffs on imported steel in March of last year, largely because they were able to raise domestic steel prices. Other countries said the taxes break global trade rules, and some have imposed tariffs of their own.

Last year, shipments from United States steel producers increased 5 percent, and steel imports are down 37 percent since the tariffs took effect, said Lisa Harrison, spokeswoman for the American Iron and Steel Institute, a trade association. She attributed the changes to the tariffs as well as regulatory reform and a favorable economy.

But higher prices have hurt the bottom lines of steel industry customers. General Motors (GM), for instance, said last week that steel and aluminum price increases due largely to the tariffs raised the prices of those commodities, costing the company more than $1 billion last year. GM expects another $1 billion increase this year.

United States Steel’s revenue rose 19 percent last year compared with a year earlier, and it swung from a loss to a net profit of $387 million.