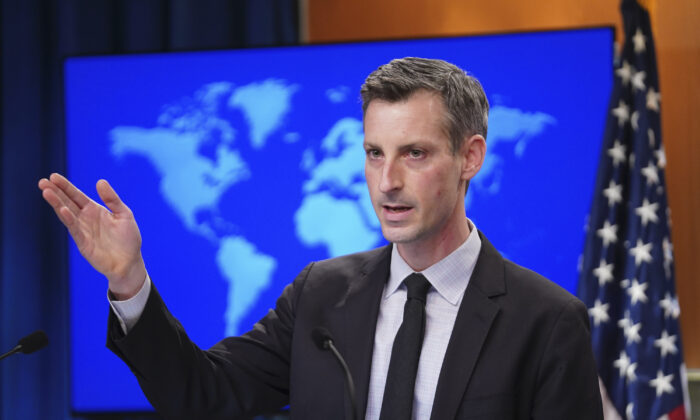 US State Department Warns Americans of ‘Risk of Capture’ in Ukraine

The U.S. State Department on Friday warned that Americans risk being captured or killed if they travel to Ukraine.

“U.S. citizens should not travel to Ukraine,” State Department spokesman Ned Price said Friday, adding that Americans should “depart immediately if it is safe for them to do so using commercial or other privately available options.”

Since the start of the Feb. 24 Russia-Ukraine conflict, there have been reports of American citizens and other foreigners trying to enter the country to fight on behalf of the Kyiv government. A Ukrainian official, Maj. Gen. Borys Kremenetskyi, said Thursday that about 100 U.S. citizens have been cleared to join Ukraine’s forces.

But Price’s Friday statement said that any citizens who travel to Ukraine “with the purpose of participating in fighting there” can “face significant risks, including the very real risk of capture or death.”

Previously, State Department and White House officials have warned Americans from going to the conflict-ridden country.

“There’s Russian bombardment and shelling going on quite violently as we speak,” Kirby told reporters on Friday. “And we do assess that the Russians are beginning to make more momentum on the ground towards Kyiv, particularly from the east. Not quite so much from the North.”

On Thursday, private satellite imagery company Maxar Technologies told Reuters it had taken images that showed vehicles in a convoy near Kyiv had dispersed and possibly have taken up offensive positions.

Kirby told reporters he is not “making too much of this dispersal stuff,” although U.S. officials have, for weeks, said that Russia will try to encircle Kyiv to overthrow the government.

Russian forces have made the largest advances on cities in the east and south, including Mariupol and around the Sea of Azov.

On the economic and political front, the United States and its allies moved to further isolate and sanction the Kremlin. President Joe Biden announced the United States will dramatically downgrade its trade status with Russia and also ban imports of Russian seafood, alcohol, and diamonds.

And a move to revoke Russia’s “most favored nation” status was taken in coordination with the European Union and Group of Seven, or G-7, countries.

Russian President Vladimir Putin said via state-run media there were “certain positive developments” in talks between Ukraine and Russia, but he did not provide any details. It came as he spoked in Moscow with Belarussian leader Alexander Lukashenko.