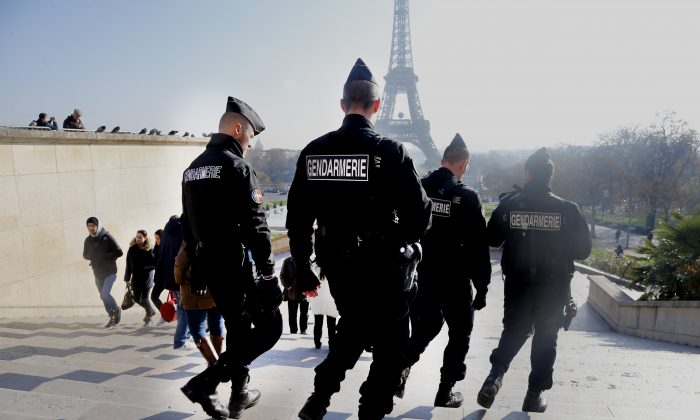 French gendarmes officers patrol near the Eiffel Tower, in Paris, Monday Nov. 23, 2015. French President Francois Hollande will preside over a national ceremony on Nov. 27 honoring the at least 130 victims of the deadliest attacks on France in decades. (AP Photo/Jacques Brinon)
US

The U.S. State Department issued a warning—a “worldwide travel alert”—for Americans due “to possible risks of travel due to increased terrorist threats.”

In a statement on Nov. 23, the agency says that “current information suggests that ISIL (aka Daesh), al-Qaida, Boko Haram, and other terrorist groups continue to plan terrorist attacks in multiple regions.” ISIL is another term for ISIS, or the Islamic State in Iraq and Syria, and al-Qaida can be spelled as al-Qaeda.

“These attacks may employ a wide variety of tactics, using conventional and non-conventional weapons and targeting both official and private interests. This Travel Alert expires on February 24, 2016,” the State Department said.

U.S. officials believe there’s an increased likelihood of attacks as members of ISIS return from Syria and Iraq.

“Additionally, there is a continuing threat from unaffiliated persons planning attacks inspired by major terrorist organizations but conducted on an individual basis. Extremists have targeted large sporting events, theatres, open markets, and aviation services. In the past year, there have been multiple attacks in France, Nigeria, Denmark, Turkey, and Mali,” the State Department added.

The heightened terror threat comes more than a week after terrorists carried out coordinated attacks in Paris, killing 130 people. ISIS claimed responsibility for the attacks.

“U.S. citizens should exercise vigilance when in public places or using transportation. Be aware of immediate surroundings and avoid large crowds or crowed places. Exercise particular caution during the holiday season and at holiday festivals or events,” warns the State Department. “U.S. citizens should monitor media and local information sources and factor updated information into personal travel plans and activities.”

“Foreign governments have taken action to guard against terrorist attacks, and some have made official declarations regarding heightened threat conditions,” the State Department said. “Authorities continue to conduct raids and disrupt terror plots. We continue to work closely with our allies on the threat from international terrorism. Information is routinely shared between the United States and our key partners in order to disrupt terrorist plotting, identify and take action against potential operatives, and strengthen our defenses against potential threats.”

Meanwhile, the Belgian capital city of Brussels remains on high alert, with schools and universities remaining closed until later in the week. Prime Minister Charles Michel said the country will remain in a heightened state of emergency due to a “serious and imminent” terrorist threat, according to the BBC.

Authorities have conducted raids in attempts to quell what they suspect is a Paris-inspired attack in Brussels.

French authorities also found a suicide belt in the city, reported the U.K. Telegraph. Officials suspect it might belong to fugitive suspect Salah Abdeslam, who has not been captured yet.

Last week, the Department said it is offering a $5 million reward for information leading to the location or identification of Tirad al-Jarba, better known as Abu-Muhammad al-Shimali, a key leader of ISIS.