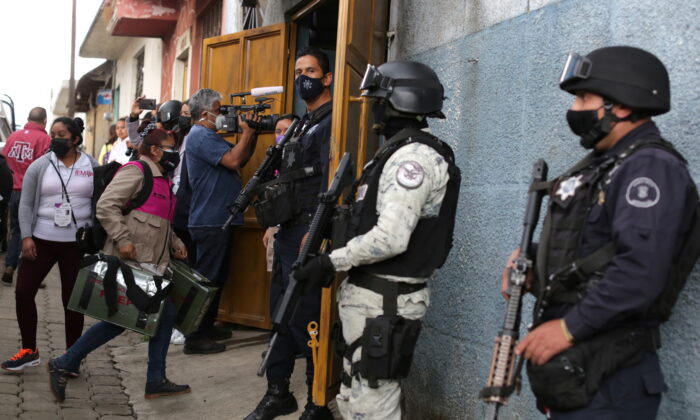 Police officers and members of the National Guard as seen in Nahuatzen, Mexico, on June 5, 2021. (Alan Ortega/Reuters)
Americas

US State Department Issues Kidnapping Advisory for Americans in Mexico

The U.S. Department of State issued an advisory warning Americans about an increased risk of kidnapping when going to Mexico, amid heightened cartel violence in several areas.

“Violent crime—such as homicide, kidnapping, carjacking, and robbery—is widespread and common in Mexico,” the State Department said Wednesday in its notice.

The federal government and State Department have limited capacity to render emergency services to citizens in many places in Mexico. That’s because U.S. government employees are restricted or prohibited from going to certain areas, according to the State Department.

“U.S. citizens are advised to adhere to restrictions on U.S. government employee travel. State-specific restrictions are included in the individual state advisories below,” the notice said. “U.S. government employees may not travel between cities after dark, may not hail taxis on the street, and must rely on dispatched vehicles, including app-based services like Uber, and regulated taxi stands.”

For government workers, they should also avoid traveling alone and in remote areas, according to the bulletin. Federal government employees also cannot drive from the “U.S.-Mexico border to or from the interior parts of Mexico” other than daytime travel in Baja California, a Mexican state that lies south of California, and a select few other areas.

“Keep traveling companions and family back home informed of your travel plans. If separating from your travel group, send a friend your GPS location. If taking a taxi alone, take a photo of the taxi number and/or license plate and text it to a friend,” according to the State Department’s bulletin.

“Use toll roads when possible and avoid driving alone or at night,” it added. “In many states, police presence and emergency services are extremely limited outside the state capital or major cities.”

Last week, hundreds of Mexican soldiers were sent to the border city of Juarez after a prison face-off between members of two rival cartels caused a riot and shootouts that killed 11 people, most of them civilians, authorities said.

Across town, convenience stores were shot at and set on fire. FEMSA, the parent company of the Oxxo chain, said in a statement that one of its employees and a woman who was applying for a job were killed in the violence.

Last weekend, in Baja California state, about two-dozen vehicles were hijacked and burned, purportedly by cartel members, according to reports. There were reports and surfaced video footage of the Jalisco New Generation Cartel issuing a declaration of a curfew in Tijuana, located next to San Diego, California, while threatening local residents.