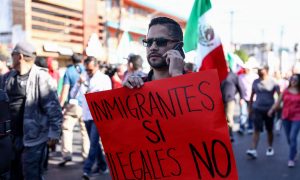 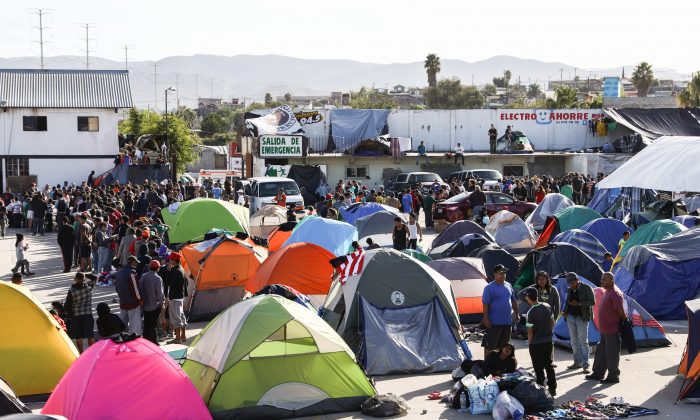 A migrant camp situated 16 kilometres from the U.S. border, fills up with Central American migrants in Tijuana, Mexico, on Dec. 2, 2018. (Charlotte Cuthbertson/The Epoch Times)
US News

New Homeland Security policy pushes humanitarian issue south for now, but could be blocked by a judge
By Charlotte Cuthbertson
biggersmaller
Print

WASHINGTON—A new effort by the Trump administration to deter thousands of Central American migrants from traveling north to seek asylum in the United States was enacted on Jan. 24—for now, only at the San Ysidro border crossing between San Diego and Tijuana, Mexico.

The effort, called the Migrant Protection Protocols (MPP), is an attempt to rein in meritless asylum claims and stop thousands of illegal immigrants from being released into the country, never to be seen again.

“We have implemented an unprecedented action that will address the urgent humanitarian and security crisis at the southern border,” Department of Homeland Security (DHS) Secretary Kirstjen Nielsen said in a statement on Jan. 24. “This humanitarian approach will help to end the exploitation of our generous immigration laws.”

Under MPP, many asylum-seekers entering the United States—illegally or without proper documentation—may be returned to Mexico to wait out their case. Mexico will provide  all the appropriate humanitarian protections for the duration of their stay, according to DHS.

“This will allow DHS to more effectively assist legitimate asylum-seekers and individuals fleeing persecution, as migrants with non-meritorious or even fraudulent claims will no longer have an incentive for making the journey,” Nielsen said.

Nielsen first unveiled the program in December, then-called the “Remain in Mexico” policy, but details were scarce until now.

So far, the policy is only active for those who enter the San Ysidro border crossing legally and present themselves for asylum. As of late-2018, Customs and Border Protection was accepting at most 100 asylum seekers per day at San Ysidro.

Legal loopholes in the asylum system are bogging down the immigration court system, which has around 800,000 pending cases and no end in sight to the backlog. The administration says the system is being gamed by illegal immigrants who are using it to gain access into the United States without any intention of turning up in court for their case ruling.

If an illegal alien is apprehended at the border and claims a fear of returning to their home country, an initial screening gives them an 89 percent chance of being released into the United States. The chances are higher if an adult brings a child. The largest group of asylum-seekers are from Central America, yet only 9 percent of those who then formally apply for asylum are granted such protections by a federal immigration judge, according to the Justice Department.

In fiscal 2017, Customs and Border Protection apprehended 94,285 family units from Honduras, Guatemala, and El Salvador at the southern border. Of those, 99 percent remain in the country today.

In the first two months of this fiscal year, almost 50,000 family units were apprehended by Border Patrol after crossing illegally. Another 9,160 presented themselves at ports of entry to claim asylum.

“We do not have the necessary space or resources to detain, house, vet, screen, and safely process this tremendous influx of people,” President Donald Trump said on Jan. 24. “In short, we do not have control over who is entering our country, where they come from, who they are, or why they are coming.”

The MPP doesn’t yet apply to all asylum-seekers who cross the nearly 2,000-mile southern border, where most are entering the United States. The Rio Grande Valley in Texas deals with almost half of all illegal crossings along the border.

DHS is implementing the MPP under Section 235 of the Immigration and Nationality Act (INA), which states, in part, “in the case of an alien … who is arriving on land (whether or not at a designated port of arrival) from a foreign territory contiguous to the United States, the Attorney General may return the alien to that territory pending a [removal] proceeding under section 240” of the INA.

The MPP is likely to be challenged by a U.S. judge, which would send it through the court system, much like other moves made by the administration to curb illegal immigration, tighten border security, or close the legal gaps that attract illegal immigrants. These include the travel ban, ending DACA, reverting to the original asylum criteria, and making illegal border crossers ineligible for asylum.

Several Central American migrants who had been in Tijuana for two months told The Epoch Times that they won’t wait in Mexico for months until an asylum claim is adjudicated.

“No, we’re not going to wait that long,” Honduran Javier Gamez, 30, said on Dec. 26, 2018, when asked about the new MPP policy. He had been staying at the migrant camp for two months with his wife and had just applied for an asylum number.

“We aren’t going to wait here a long time, we’re going to jump then [cross illegally]. The most we can bear is two months [longer in Tijuana],” he said.

Others aren’t applying for asylum, but rather, waiting for the opportunity to cross the border illegally.

Guatemalan Mario Rene Alegria Chavez, 62, said he is working a construction job in Tijuana and doesn’t intend to claim asylum in the United States.

“It seemed really difficult, so that’s why I didn’t start the process to get my papers,” he said. “I have two options: I can stay here or I can cross [illegally] into the United States.”

Karla Bexaida Membreino, 23, traveled with her husband and his cousin from Honduras. She has applied for asylum, but her husband refused to.

“He’s afraid that they’re going to deport him,” she said. “When we arrived, we weren’t going to wait for a long time, they were going to open the border. But it didn’t happen like we expected .. .we have to wait forever.”

In Tijuana, public safety secretary Marco Antonio Sotomayor said he hopes the Mexican government will secure its southern border with Guatemala and not allow unregistered caravan migrants access into Mexico.

“We know that within the group of migrants, there are some hidden Central American criminals coming, who have current orders in their countries or criminal records,” Sotomayor told The Epoch Times on Jan. 14. “So, that part, from my point of view, is very risky. We are demanding that the federal government not allow access to our national territory without a legal, orderly process.”

Sotomayor said it has been challenging and very costly for the city to handle the thousands of caravan members since November.

“I have the understanding that the government’s position is not to accept them. If they [the United States] want to return them to Mexico, they will not receive them,” he said.

“Obviously, we condemn that a foreigner who asks for asylum to the United States has to remain in national territory in Tijuana. What we want is if someone asks for political asylum and if a process is opened in the United States, well then, he should be received by the United States. We do not want Tijuana to be in charge of that.”

But, he said, it’s a federal issue between the governments of the two countries.