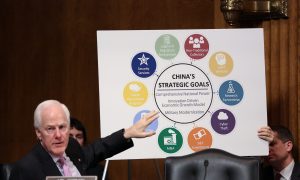 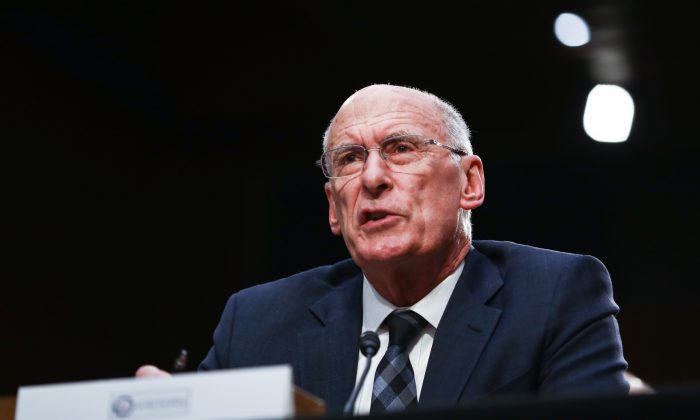 Office of the Director of National Intelligence Director Daniel Coats testifies at a hearing in front of the Senate Intelligence Committee in Congress in Washington on Jan. 29, 2019. (Charlotte Cuthbertson/The Epoch Times)
China-US News

US Spy Chiefs Warn About China’s Growing Threat to Security

China poses a serious and growing threat to the United States, particularly in the field of technology, U.S. intelligence leaders told a Senate hearing Jan. 29.

In a hearing focused on technologically advanced security threats, intelligence officials described aspects of the Chinese regime’s multifaceted plan to surpass the United States as the world’s superpower, including through intellectual property theft, military expansion, and gaining global influence through investment programs under its Belt and Road Initiative.

Echoing previous comments made by officials and lawmakers, FBI Director Christopher Wray spoke of the seriousness of the Chinese regime’s threat to U.S. national security.

“Frankly, while we were sleeping in the last decade and a half, China had a remarkable rise in capabilities, that are stunning,” Coats said.

“A lot of that was achieved … by stealing information from our companies, by inserting Chinese [workers] … in our labs, [and] bringing back … stolen properties.”

Coats said intelligence officials have been working with the business community, meeting with corporate executives to discuss espionage threats posed by China.

The United States, Coats said, also has warned its allies about the risks of doing business with China, and these allies are now questioning their dealings with the communist country.

“[Our allies are] now finding their product has been duplicated by the Chinese and sold at half the price because they didn’t have to spend as much money on research development,” he said.

“Especially concerning have been the efforts of big Chinese tech companies which are beholden to the Chinese Communist Party to acquire sensitive technology, replicate it, and undermine the market share of U.S. firms with the help of the Chinese state.”

Sen. Angus King (I-Maine) referred specifically to Huawei, saying the company had a choice of either being a global telecommunications company or an agent of the CCP.